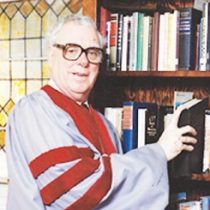 Rev. Dr. Henry Gregory Dinsmore Wyman, a World War II Veteran, passed away peacefully with his wife by his side on September 21, 2019 at his residence in Hopkinton, MA. He was born in Brewer, Maine on November 7, 1924, the son of Samuel and Ethel (Linscott) Wyman. He leaves behind his wife, Dr. Sona Averill Wyman whom he met at the Bangor Public Library and was married to for 71 years. He also leaves behind his daughter, Rev. Susan Wyman and her husband, Rev. Dr. Steven Blackburn of Pleasant Valley, CT and his son, Stephen Wyman and his wife, Nancy (Thompson) Wyman of Hopkinton, MA, as well as four grandchildren and two great grandchildren.

Rev. Dr. Wyman was a 1943 graduate of Brewer High School and almost immediately enlisted in the U.S. Army where he served as a medic and was part of the Invasion of Normandy landing on Omaha Beach on day two. He remained in the European Theatre for two and a half years and received five battle stars: Normandy Campaign, Northern France, Rhineland, Ardennes/Alsace(Battle of the Bulge), and Central Europe(Germany with Patton’s Army). After returning from the Army, Rev. Dr. Wyman returned to Brewer where he attended the Bangor Theological Seminary for a year then transferred to the University of Maine receiving a Bachelor’s degree in 1949 and a Master of Arts degree in 1950. He then taught school for two years in Windham, NY before deciding to return to the Seminary, choosing Hartford Seminary and graduating from there in 1956. He served three great UCC Congregational churches full time. The first was in Columbia, CT(1952-1956), the second in North Olmsted, OH(1956-1968) and the third in Patchogue, NY(1968-1991) where he served for 23 years before retiring in 1991. After retirement, Rev. Dr. Wyman kept busy as an interim minister in CT, RI and then moved back to Bangor, ME where he served as interim minister in Fort Fairfield, Newport, Pittsfield, Brownville, Lincoln and then, finishing his ministry, in Dover-Foxcroft. Rev. Dr. Wyman was bestowed two honorary doctorates, was a past Rotarian and a proud member of the Bangor Kiwanis Club and the American Legion Post No. 12. He had a great love for his family, friends, pets, music and for a robust theological discussion.

Contributions in his memory may be made to a charity of your choice or to the Bangor Kiwanis Charities, Inc. (for the Playground Project), P.O. Box 1871, Bangor, ME 04402-1871 or to the American Legion Post 12(for Veterans in need), c/o Commander Damon, 647 Main Street, PO Box 327, Bangor, ME 04401. Friends are invited to a graveside ceremony at Mt. Hope Cemetery, meeting at the Cemetery’s Superintendent’s building by 10:15 on October 5, 2019. Graveside service will take place at 10:30am. Immediately following the service, all are invited to an informal luncheon. Details will be handed out at that time.