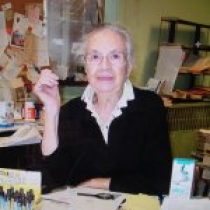 Holliston, MA, Helen Gertrude (Mullikin) Overturf, passed away on June 17, 2014, at the age of 97 years and 9 months. She was born September 30, 1916 in Hilltop, KY to Reverend Robert Edward Millikin, (Graduate of Texas Christian Seminary) and Gertrude (Callahan)Mullikin, named after Helen Candus Vaughn Neal, Gertrude’s great grand mother. Helen was the oldest of 4 girls. She lived most of her youth in Piqua, KY. As a child she helped her father build the family farm house which instilled a fascination for architecture. A long time resident of Middletown, OH, where she had a radio talk show at WPFB ,”Sounding Board” “For the People, By the People and About the People of Middletown” call in show in the 1960’s. She opened her own health food store, “The Sunshine Shop” and later changed the name to “Helen’s Health Foods”, in 1976, operating it for 31 years. She was the “Mother Teresa” of nutrition, giving both education and vitamins to people in need. Cause of death is believed to be from vascular dementia with acute infarct(s) at the end.
After high school she moved to Cincinnati, OH to attend the University of Cincinnati studying architecture and she also studied voice at the Conservatory of Music. The war interrupted completion of degrees. She taught sewing for the Singer Sewing Machine factory store. She was a very visually talented clothing designer and eventually had her own seamstress shop.
She met Floyd Frank Overturf in Cincinnati, OH and they were married in October of 1943. While Floyd was off serving in WWII, Helen’s “Rosie the Riveter” job was as a routing agent for the rail road at Union Station in Cincinnati, OH. If accidentally described as a ticket agent she was eager to correct that information, as she routed civilian and military all over the USA via train.
From this union two girls were born, Candus (Bill) Clark and Lisa (Dr. Lawrence) Bobrin. At the time of her death she is also survived by two grandsons, BJ (Becky) Clark and Ben Bobrin and two great grandchildren, Juliet and Henry Clark. She is also survived by one sister, Ann Mullikin in Carlisle, KY. Two other sisters, Janice Hodges and Marjorie Montgomery preceded her in death. She is also survived by several nieces and nephews.
Helen Overturf spent a lifetime pursuing many passions such as pastels, weaving, quilting, sewing clothing for herself and her girls, interior decorating, furniture restoration, organic gardening, and finally nutrition. She designed the addition on the house complete with kitchen remodeling, custom hand built stone retaining walls, and then managed a barn/ greenhouse construction way into her 70’s. She operated Helen’s Health Food’s until she was 91 years of age. She lived alone 2 more years before being moved to Holliston, MA. She was quite active accompanying her daughter on grocery shopping errands into her 96th year. In December of 2012 her left hip broke and was replaced. She never regained full mobility. She entertained herself by reading the newspaper and ripping old wool clothing apart for it’s repurposing. Had there not been some regulation, I am sure she would have loved to have made lap quilts for everyone. If the nursing home had had a “greeter” she would have loved the job. She was gracious and friendly to everyone. Helen read her Boston Globe every day. Vascular dementia robbed her at the end and an acute stroke made her bed ridden the last weeks of her life. Helen was very civic minded and would mail off boxes of clothing to orphanages or minority boarding schools. If you would like to give a donation she would appreciate the support of LaVida Mission, Inc., PO Box 3308, Farmington, NM, 87499, located at 700 County Road 7730, Lake Valley Area, Crownpoint, New Mexico, 87313. (Email: office@lavidamission.org) Helen’s brain was donated to the Harvard Brain Tissue Resource Center (HBTRC) so that more information can be gathered about dementia, depression and methylation errors. We should all have a life as well lived as Helen.