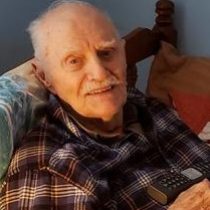 Guy Littlefield Morse Jr., 93, of Holliston, passed away on Wednesday, August 19, 2020 at Metrowest Medical Center in Framingham. Born in Milford, MA, he was the son of the late Beatrice (Atkins) and Guy L. Morse Sr. He was the husband of the late Santina (Tonelli) Morse.

Guy enlisted in the Navy in 1944, and was stationed in Saipan, Guam, as a member of the Seabees. He later worked as a truck driver for Seavers Express of Milford. An avid outdoorsman for the entirety of his life, Guy enjoyed fishing, camping, and snowmobiling, particularly with his extended Littlefield-Morse family of which he was a proud member. He was especially gifted at restoring antique cars, a hobby he enjoyed late into this life.

Guy is survived by his three children, Guy L. Morse III and his wife, Nancy of Centerville, Ronald Morse and his wife, LeeAnn of Millbury, and Deborah Larose-Jordan and her husband, George of Maryland. He also leaves behind his sister, Beverly A. Seavey of Florida, as well as his long-time companion, Kathleen Kerrigan of Holliston. “Grampy” will also be greatly missed by his eleven grandchildren and many great-grandchildren.He is predeceased by his siblings, Evelyn Shepard, Gloria Mahoney and Frank Morse, and by his first wife, Susan (Palmer) Frullo.

Guy’s family would like to thank Sean Hogan for his long time friendship and support, and Care Resolutions, Inc. for their comfort and compassion during the past several months.

Due to current Covid-19 restrictions, a private burial will be held for immediate family on Tuesday, August 25th at 11 AM, at Lake Grove Cemetery, Highland St. Holliston. A memorial gathering will be planned at a later date. In lieu of flowers, please consider a donation to Bay Path Elder Services or the Visiting Nurses Association. Arrangements are under the care of the Chesmore Funeral Home of Holliston, www.ChesmoreFuneralHome.com