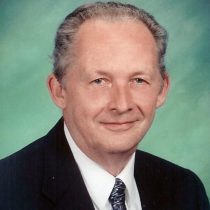 A Memorial Mass will be said in his name on Wednesday, January 23rd at 9:00 a.m. at St. Mary’s Church, Holliston

Born in Worcester, MA, he was a son of the late George W. Gabriel II and Phyllis MacDonald Gabriel Christensen. Bill attended elementary schools in Bayside, Queens, New York City and graduated from Auburn, MA high school in 1955. He obtained a BS in Business Administration from Maryland and a MBA from Pittsburg. In 1961 he married the late Barbara A. Bennett of Burlington, MA who predeceased him in 2006.

George, known to his family and friends as Bill, was employed by John Hancock Financial Services for 35 years. Bill served for many years representing John Hancock on the Pension Committees of both the Life Office Management Association and the Insurance Accounting and Statistical Association. At his retirement in 1993 he was General Director, Agricultural Investments. He also served in the US Air Force from 1955 to 1959, having spent most of his assignment in the Far East. After his retirement Bill enjoyed spending time at his beloved cottage on the lake in Maine, playing golf, boating, ATVing, traveling and most of all spending time with his grandchildren.

Bill, having lived in Holliston for 40 years, gave back to his community having served on many Holliston town committees and was elected to the Regional School Committee in 1976 -1978. An active member of the First Congregational Church of Holliston, Bill has been chairman of the Finance Committee, a member of the Board of Deacons and was its Moderator from 1980 to 1993. He was also elected to the Holliston Town Republican Committee and had served both as its Secretary and its Chairman.

Bill, a direct descendant of Mayflower passengers Henry Samson and Richard Warren and a member of the General Society of Mayflower Descendants, was also very active with the children of Holliston having coached youth hockey, little league and Babe Ruth baseball. He also was a member of the Holliston Youth Hockey board of directors from 1977 – 1984 and was its chairman and president from 1979 -1983. He has also been active in many organizations including the New England Historical Genealogical Society, the Joel H. Prouty Lodge, A. F. & A. M., was a life member of both the Newfield, Maine and Holliston, Massachusetts Historical Societies, the Mystic Valley Railway Society, North American Rail Car Association, Model T Ford Club of America, and was a founder and past Chairman and President of the Whitehouse Road/Balch Lake Association.

He leaves his son G. William Gabriel IV, his wife Joan, their children and his beloved grandchildren Audrey Elizabeth and George William V of Holliston, a brother Walter A. and his wife Patricia of Grandville, MI., many cousins and several nieces and nephews and his dearest friend and confident Barbara A. Paiton of Strafford, NH.

Visitation will be held on Sunday, November 18th from 4-7pm at the Chesmore Funeral Home of Holliston, 854 Washington St. www.ChesmoreFuneralHome.com A funeral home service will take place on Monday, November 19th at 11:00 a.m. in the funeral home. A memorial mass will be said in his name on Wednesday, January 23rd at 9:00 a.m. at St. Mary’s Church, Holliston. Memorial donations may be made in his name to the Gabriel Youth Endowment Fund that both he and his wife Barbara established over a decade ago, c/o First Congregational Church, 725 Washington Street, Holliston, MA 01746.