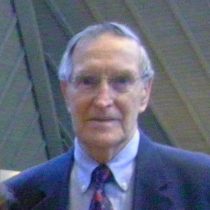 George R. Travers, 88, of Holliston, passed away Thursday, December 1, 2022, at Brookdale Cushing Park in Framingham. Born in New Bedford, Massachusetts, he was the son of the late Joseph and Mary (Zygiel) Travers. He was the husband of 55 years to Mary (Walsh) Travers.

George served in the Army as part of the Signal Corps, followed by five years in the Army Reserves. After discharge, he went on to work in research and development for the Army for many years at Natick Labs. He was actively involved in his sons’ sports activities when they were younger. George enjoyed playing tennis, golf, and bowling and was an avid watcher of Boston sports teams. Most importantly, George was a devoted family man. He especially loved visiting his grandchildren in Illinois. He also enjoyed traveling, particularly his trip to Europe in 2004.

Besides his wife, George is survived by his two children, Paul Travers and his wife, Mary Ann of Downers Grove, Illinois and William Travers and his wife, Jessie Washington of Decatur, Georgia. He also leaves behind three grandchildren, Savannah, Jackson, and Brady, and many nieces and nephews. He is predeceased by his siblings, Gilbert Travers, Joseph Travers, and Dorothy Wilde.

Visitation will be held on Friday, December 9th from 3:00-7:00 p.m. at the Chesmore Funeral Home of Holliston, 854 Washington St. A funeral Mass will be celebrated on Saturday, December 10th at 10:15 a.m. at St. Matthew Church in Southborough. Burial will follow in Calvary Cemetery in Waltham. In lieu of flowers, donations may be made to the Alzheimer’s Association at http://act.alz.org/goto/george_travers or to 309 Waverley Oaks Rd, Waltham, MA 02452.