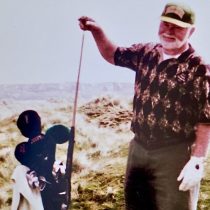 George Joseph Sims, 93, of Holliston, passed away on Saturday, December 3, 2022 at the Metrowest Medical Center in Framingham. Born in Brookline, he was the son of the late Margaret (Lynch) and James Sims. He was the husband of Barbara (Warren) Sims and the late Mary Sims.

George was an avid golfer, always trying to play seven days a week. In addition to golf, he enjoyed bowling and baseball; even having tried out for the Red Sox. George was the president of the union at Wellesley College and was also the business manager there as well.

Funeral services are being held privately and are under the care of the Chesmore Funeral Home of Holliston. In lieu of flowers, donations may be made to Baypath Humane Society at baypathhumane.org/support-us  or 500 Legacy Farms N, Hopkinton, MA 01748