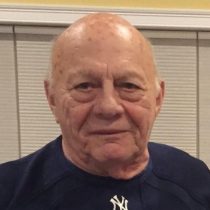 All are welcome to join together to celebrate George’s life immediately following the service at the 45 Restaurant at 45 Milford Street, Medway.

George Emerson Hayes, 87, of Holliston, passed away peacefully at Timothy Daniels House in Holliston on Monday, August 22, 2022. Born in Boston on March 29, 1935, he was the son of the late Vincent and Rose (Jordan) Hayes. He was the husband of 59 years to the late Ann “Nancy” Elizabeth (O’Leary) Hayes, who recently passed away. Together they raised a loving family in Holliston, where they resided for 56 years.

George was a dedicated employee at Roche Brothers in Natick for many years before retiring in 2000. He was an avid golfer enjoying his down time, primarily at Pinecrest Golf Club in Holliston, where he was also a ranger. He could usually be found at Cornell’s Irish Pub in Hopkinton on a Saturday hanging out with his buddies and relaxing over lunch with his children.

Visitation will take place on Friday, August 26th from 10:00a.m.-12:00p.m. at the Chesmore Funeral Home of Holliston, 854 Washington St. All are welcome to join together to celebrate George’s life immediately following the service at the 45 Restaurant at 45 Milford Street, Medway.