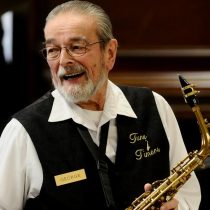 Service to be held at a later date

George was a World War II veteran, serving in both the Merchant Marines and the U.S. Army during World War II. After discharge, he worked for GTE Labs in Bayside New York. In 1972, he transferred to GTE’s Waltham facility, and relocated his family to Holliston, MA. After forty plus years, he retired in 1991 from GTE which subsequently merged to become Verizon Communications. During his retirement, he worked in the mornings at Sandy Burr Country Club in Wayland. In the afternoons,  he enjoyed playing golf with his friends. George also enjoyed playing his saxophone as a member of the “Tune Timers” band at the Holliston Senior Center.

Services to celebrate George’s life will be held when it is safe to do so. In lieu of flowers, donations may be made in his memory to the Holliston Senior Center, 150 Goulding St. Holliston, MA 01746. Arrangements are under the care of the Chesmore Funeral Home of Holliston.