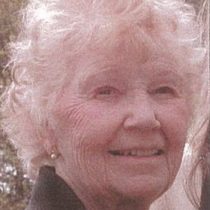 Genevieve ( Reid ) Hayneswas born on January 6, 1920 in Hingham Massachusetts to Alice (Huestis) and Frederick Reid. She passed away September 6, 2010. She grew up and spent many years of her life in Hopkinton. She had several siblings; June ( Fairbanks), Henry, Roy, David, Frank and Steve Reid.
Gen worked on Data Processing at the Natick Army Research Lab until retirement. Genevieve was an accomplished seamstress, avid gardener, and loved books, antiques and auctions. She especially loved to travel with her late husband Richard Haynes who died in 2003. She often played scrabble and visited with her classmates at the Hopkinton Sr. Center.

She and her late husband Louis T. Geneseo raised their family in Milford, he passed away in 1950, they also lost their son CPT. Louis Geneseo, U.S. Army Special Forces of Sweden Maine, who was killed in combat in Vietnam in 1969. She leaves her daughter-in-law Barbara Geneseo and three grandchildren; Mary Sohl, Jennifer Campbell and Steve Geneseo. She also leaves her second son Jerry and his wife Judy Genesio of Bridgton Maine and grandchildren; Louis, Lauri, Mark and Kristy Dixit. She also leaves her third son Stephen and his wife Ann of Sweden ME., and grandson William Geneseo .

Genevieve lost her husband John Feeny in 1973. She also leaves their daughter Kate and her husband Dr. Thomas Piemonte and granddaughter Ashley of Dover MA.

There will be a service at the St Paul’s Episcopal Church in Hopkinton on Sept. 19th at 2pm for anyone who would like to attend. Burial will be a private family service at the Ridlonville Cemetery in Sweden Maine.

Donations in her memory can be made to : St Jude Children’s Research Hospital, PO Box 3704 Memphis TN 38173