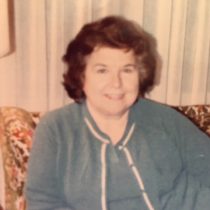 Gaetana “Tina” Centracchio, 92, a former longtime Holliston resident, had moved to Naples, FL in 1998, passed away Tuesday, October 10, 2017  at Naples Medical Hospital after an 8-day struggle as the result of a fall. She was the beloved wife of 65 years to the late John C. Centracchio.

Tina was born in Santa Caterina, Sicily on November 10, 1924, the first child born to the late Pasquale and Santa (Fiandaca) Iannello. She moved to East Boston at age 18 months, graduated from East Boston High School in 1941 and married John in 1949 after a long courtship, much time of which John was overseas in the Army serving in World War II.

Tina was the loving mother of 2 daughters, Jane Centracchio, who died in 1973, and is survived by daughter Paula Archuleta, son-in-law Ricardo Archuleta and grandchildren Juan and Victoria Archuleta of Glen Cove, NY.  She also leaves behind her sisters, Loretta Townsend and Carol Reppucci, in-laws John Townsend, Franny and Norma Nolan, John Heil, and many nieces and nephews and their families, all of whom she loved very much. She was predeceased by her sister Anna Simmons, in-laws George Simmons, Anthony Reppucci and Elaine Heil.

In addition to being a wonderful mother and grandmother, Tina helped husband John build and run his business Regal Office Supply Co., formerly of Railroad St. Holliston. She worked for the Holliston Town Clerk, was a manufacturer’s rep for G.E. Mobile Radio and office manager for G.E. Credit Corp. Tina was a bright and caring person who loved life, always had a positive attitude, and was a great listener. She was an avid bridge player all her life. Earlier, she enjoyed tennis – especially doubles with husband John and their friends. She played golf in a 9-holers league until 5 years ago. She also loved investment management, daily newspaper puzzles, Scrabble, politics, travel, and was a great cook. She will be missed very much.

A funeral mass will take place on Friday, October 27th at 10:30a.m. at St. Mary’s Church of Holliston. Burial will follow mass in Lake Grove Cemetery. In lieu of flowers, donations may be made to the Jimmy Fund, 10 Brookline Pl, Brookline, MA 02445 or jimmyfund.org