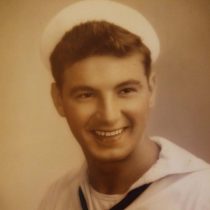 Frank grew up in Chicago and lived in Charlestown, MA for many years. He was a member of the Charlestown Lion’s Club, where he was well loved. He was very charitable and was involved in many local charities; including being the Townie Santa for many years in Charlestown.  A Navy Veteran of the Korean War, Frank was the Chief Engineer at Bunker Hill Community College, having been the first employee hired.

He is survived by his three children, Frank Cashman Jr. and his wife, Carole of Chelmsford, Joanna Cashman and her husband, Adam Tate of Eugene, OR, and Kathy Johnson and her husband, Kevin of Millis. He also leaves behind his grandchildren, Rachel McDonald, Ryan Johnson and his fiancee, Jessica Perry, and Jay Cashman; several great-grandchildren and many nieces and nephews in Illinois.

A funeral mass will be celebrated on Monday, December 3rd at 11:00 a.m. at St. Mary’s Church of Holliston.Arrangements are under the care of the Chesmore Funeral Home of Holliston.
In lieu of flowers, donations may be made to Lion’s Club, Elder Care, or American Cancer Society.