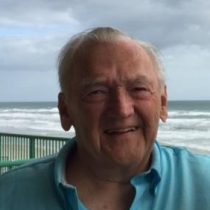 Francis W. Ludwick, 80, of Framingham and a former longtime Holliston resident, passed away at Care Dimensions in Lincoln. Born in Boston, he was the son of the late Elsie (Collins) and Francis J. Ludwick. He was the husband of 30 years to Rochelle “Shelly” (Chandler) Ludwick of Framingham.

Francis was a former volunteer firefighter for the town of Holliston. He was also a member of the Brothers of the Brush and helped coordinate the parade and Fireman’s muster for the 250th celebration of Holliston. Francis was involved with youth hockey in Holliston when his son was young. In the early 60’s he loved racing at Seekonk and Westboro Speedways.

Besides his wife, Frank is survived by his brother, Robert Ludwick of Tacoma, WA; his son, Martin Ludwick and his wife, Becky of Deering, New Hampshire; three step-children, Michelle Quinn and her husband, Robert of Holliston, Robert Martin and his wife Sarah of Westbrook, ME, and Kyle Martin of Framingham. He also leaves behind three grandchildren, Jason and Jenna Quinn and Samantha Benson; two great-grandchildren, Sophia and Olivia; his niece, Lori Anne Aest and her husband, Greg and their children, Max and Alexi.

A graveside service will be held on Saturday, October 2nd at 11:00 AM at Lake Grove Cemetery in Holliston. In lieu of flowers, donations may be made to Care Connections Hospice House, 125 Winter Street Lincoln, MA 01773. Arrangements are under the care of the Chesmore Funeral Home of Holliston.