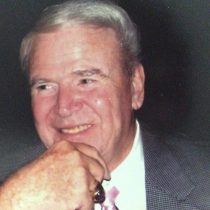 Mass in his memory to be said at a later date at St. Mary’s Catholic Church in Milford

Francis J. Mullen, 91, a resident of West Palm Beach, FL, passed away at his summer home in Yarmouthport, MA on Sunday, September 22, 2019. He was born on January 19, 1928, grew up in Hopedale, MA and was a longtime resident of Holliston, MA.

He was the loving son of Fred J. and Helen (Logee) Ring, and was a graduate of St. Mary of the Assumption Catholic High School in Milford, MA; class of 1947. After graduating high school, Francis began work at the Draper Corporation, but was soon thereafter drafted into the Army and satisfied his military service obligation honorably.

Upon discharge from the service, Francis, while continuing  to work, studied to become a draftsman and obtained employment at the Natick Labs Quartermaster Facility in Natick, MA, where he continued to work until his retirement.

In addition to remaining close to family, Francis had many life-long friends. He was best man at many of their weddings and godfather to many of their children, even having  one such godchild named after him.

Francis was a good friend, uncle, cousin, godfather and a man of great integrity for which he was admired and loved. He was a sharp dresser, great dancer and always loved a good party. He was passionate about his painting and continued painting until his death, creating wondrous seascapes that many of us were gifted with and will always treasure.

Although Francis loved a party, he never wanted the party about him. He requested that no funeral services be held and as such, his request will be honored. However, a request will be made of St. Mary’s Catholic Church in Milford, MA, as well as the catholic church in Palm Beach, FL that a mass be said in his remembrance as he requested. We all were fortunate to have Francis in our lives and he will be greatly missed.