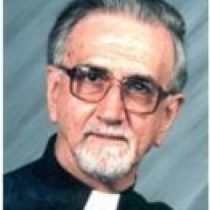 Fr. Victor Mosele, SX-
On August 23rd, Fr. Victor Mosele passed away in Milwaukee, WI, after a long battle with the Lou Gerhig disease (ALS). In November, he would have turned 77 years old. Fr. Victor joined the Xaverian Missionaries in 1946 in Italy. He studied Theology at St. Francis de Sales Seminary in Milwaukee. He was ordained a missionary priest on January 6, 1960. He spent the first years of his ministry in the USA involved in missionary and vocation animation. Then for almost 30 years he served with intensity and zeal in our missions in Sierra Leone, W. Africa. During the Sierra Leone civil war (1991 – 2002) which enveloped the country in violence and bloodshed, he was kidnapped twice, but thanks to the help of some child soldiers and local people, he was able to escape.

In 2001, Fr. Victor was assigned again to the USA for mission awareness and vocation work. He served in several Colleges and Universities in Illinois and Wisconsin as chaplain until ALS put a halt to this untiring services. At this time, as we mourn the loss of a dedicated confrere, we celebrate the unselfish and zealous way he lived his life as a missionary. We hope his legacy will be an inspiration for others, especially the youth. May he hear the Master say, “Come, good and faithful servant!” The Mass of Resurrection will be celebrated at Fatima Shrine (101 Summer Street – Holliston, MA.) on Friday, August 31, 2012 at 5:30pm followed by the burial in the Xaverian community cemetery. Arrangements are under the care of the Chesmore Funeral Home of Holliston, www.ChesmoreFuneralHome.com