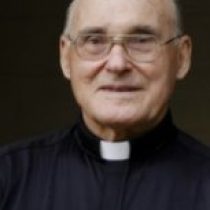 The United States Province of?Xaverian Missionaries mourns the death of Father Gerard G. Furlan SX., 82 years old. Fr. Gerry, as he was affectionately called, entered Eternal Life to encounter his Lord on Wednesday, December 11, 2013 at UMass University Hospital in Worcester. On Tuesday morning, December 10th, while walking on the Shrine grounds he fell backwards and hit his head very hard on the asphalt.??Fr. Gerry was in a coma from which he never recovered. He remained unconscious throughout the day. Fr. Francis?gave Fr. Gerry the last rites. Throughout the day he was surrounded by his confreres, the Xaverian sisters and Tara one of our friends. Together with?Fr. Tony we kept?Fr. Gerry company?praying the Psalms and then?the Office for the Dead. His heart stopped beating at 1:54am on Wednesday, December 11, 2013.

Fr. Gerry was born in the province of Vicenza, in Northern Italy in 1931. He joined the Xaverian Missionaries in 1946 and made his first profession of religious vows in 1951. He was sent to the United States to complete his studies in Theology and was ordained to the missionary priesthood in Franklin,WI in 1958. He was Treasurer of the Xaverian Franklin community from 1958-67 and Vice-Rector 1959-1961.

In 1967 he was assigned to Indonesia; where he served as teacher and assistant pastor in in Pekambaru and Padang, two towns located on the Island of Sumatra. He returned to the United States in 1973 and served as the Treasurer of the Xaverian community of Holliston, MA from 1973- 1980.

In 2000 he returned to Holliston, MA where he was once again Treasurer of Xaverian Community from 2005 till 2008. Besides serving the community he continued to be active in pastoral ministry to local parishes and especially to the Sisters at Bethany Health Care Center in Framingham until his death. He is survived by his brother Enoc and by nephews and nieces all living in Italy.

Fr. Joseph Metteucig SX, Rector of the Xaverian Missionaries community in Holliston recalls Fr. Gerry as “faithful worker of the Gospel. Whether here or in the missions, always an active, generous, serene, compassionate, and dedicated confrere. Available to help even in the most simple tasks. Like the Martha of the Gospel often working behind the scene making sure that things moved on smoothly. We will miss his faithful presence, his practical skills in the kitchen or in his garden. The Shrine will certainly miss his “Indonesian Hail Mary”, his hot chocolate during the Christmas Lights, passing out the candles at the 13th of the Month gatherings and his creativity in painting the signs for league activities. Gerry, we are going to miss you, good and faithful servant of the Gospel. May God continue to reward you for all the simple and humble ways which helped us carry on our mission and our ministry here in Holliston. Thank you!”

Visitation will be at Fatima Shrine Church , 101 Summer St. Holliston on Sunday evening from 5:30 till 8:00pm. The Mass of Resurrection will be celebrated at the Shrine, Monday, December 16, at 10:30am followed by the burial in the Xaverian Community Cemetery.

The Furlan Family and the Xaverian Missionaries extend their gratitude to the many friends and benefactors who have walked with Fr. Gerry throughout his missionary life. We would like to thank the EMS and Police personnel of Holliston, the doctors and nurses at the UMASS University Hospital – Trauma Center in Worcester for their incredible kindness, attentions and assistance. In a special way, we want to thank the anonymous early morning pilgrim who found Fr. Gerry and called 911, enabling us to be with him till the end. To all of you our heartfelt gratitude and a promise to keep you and yours in our prayers.

May his soul and the souls of all the faithful departed through the mercy of God rest in peace.