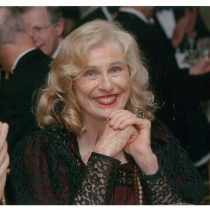 Philanthropist Faith K. Tiberio, 92, of St. Augustine, FL, passed away suddenly Monday, July 17, 2017 while at her summer residence in Sherborn, MA. The great-granddaughter of New York shipping magnate, Isaac Hall and Emma Lukens Hall of New York, and daughter of the late Marguerita (Phillips) and Raymond T. Kuhrt, Faith married the late Joseph Tiberio during WWII. She and Joseph met at the USO in St. Augustine where Faith was a hostess.

The couple established a small manufacturing concern in Holliston, Massachusetts. Today, Century-TyWood Manufacturing, Inc. is a global entity, providing not only metal fabrications, but fiber optic and green solutions worldwide. Taking the reins upon her husband’s passing, Faith was fully engaged as President at the time of her death.

Faith’s interests included arts, antiques, horticulture, and history to name a few. As such, she served a four year term as the Curator General of the Daughters of the American Revolution Museum in Washington, DC and 70 year member of same; former board member of the Massachusetts Horticultural Society; member of the Descendants of the Signers of the Constitution; member of Colonial Dames, Mayflower Women, President of the of Women’s National Farm and Garden, the Antiques Car Club of Massachusetts; and on the board of directors at Lightner Museum in St. Augustine.

The Tiberio’s philanthropic legacy has had a significant impact on countless organizations in both St. Augustine and the Boston area. Accordingly, to name but a few of the recognitions received most recently from Florida are the coveted DeAviles Award, and the “Recognizing Outstanding Women in the Arts” award, and “10 who made a difference in St. John’s County” award. Awards in MA proliferate but most recently she received the Lifetime Achievement Award from the antiques car club.

In addition to her daughter, Faith Dougherty, and her husband Daniel of Great Falls, Virginia, survivors include, daughter-in-law, Linda Tiberio of Blackstone, MA; two sisters, Kay Burtin of St. Augustine, and Grace Camelia Ciocca of Holliston, MA. She also leaves behind her grandchildren, Raymond Tiberio, Harry Tiberio and his wife Kerrie; Faith Feuer and her husband Daniel, and Dakota Doughtery; as well as 3 great-grandchildren who are Noah Tiberio and Arielle and Samantha Feuer. Faith is survived by many nieces and nephews, and Joseph’s brother, Henry Tiberio.

Private burial services were held at Pine Hill Cemetery in Sherborn. A memorial service is scheduled for Saturday, August 12th at 9:00a.m. at the Pilgrim Church, 25 South Main St. in Sherborn. In lieu of flowers, donations may be made to the Joseph W. and Faith K. Tiberio Charitable Foundation to promote education and humanitarian endeavors, in care of 79 Lowland St. Holliston, MA 01746. Arrangements are under the care of the Chesmore Funeral Home of Holliston, www.ChesmoreFuneralHome.com