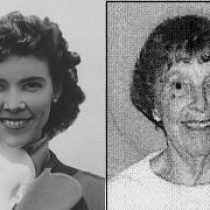 She leaves her husband of 50 years, Irving Campbell Cahill; a daughter Sue and husband Jim Gosnell of Sutton; three granddaughters Kristin, Heather and Rachael also of Sutton; 2 sisters, Martha E. Hall of Lakeville; Thelma Long of Hingham and many nieces and nephews.

Evelyn was born in Melrose on January 25, 1924 and was the daughter of the late Joseph and Elsie Elizabeth (Rolls) Etsell.

Prior to raising a family, she worked in Boston at the Boston Five Cents Savings Bank in the mortgage department.

In accordance with her wishes, a private graveside service is planned at Mount Auburn Cemetery in Hopkinton. Arrangements are from Chesmore Funeral Home in Hopkinton.