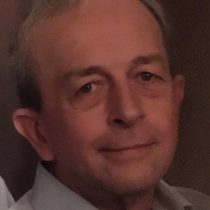 Evan F. Jr. “Bucky” Kuharich, 69, of Jacksonville, FL and formerly of Holliston, MA passed away on May 31, 2016 at Saint Vincent’s Hospital. He was the son of the late Genevieve (Yochimowitz) and Evan F. Kuharich Sr.

After graduating High School he was drafted into the United States Army and served in South East Asia during the Vietnam War where he was awarded a Purple Heart.

Upon returning from war Evan married Eileen (Schmidt) and immediately started a family. Evan attended William Patterson College and was a career engineer for over 35 years. He received patents for supercritical water oxidation processing technology and retired in 2013 from the Florida State College of Jacksonville where he was a Professor of Industrial Technologies for 15 years.

Visitation will be held on Saturday, June 25th from 3:30-6:30p.m. at the Chesmore Funeral Home of Holliston, 854 Washington St. www.ChesmoreFuneralHome.com A funeral home service will follow visitation at 6:30p.m.

In lieu of flowers the family asks that you consider making a donation to the Holliston Pantry Shelf. http://www.hollistonpantryshelf.org/donate.html