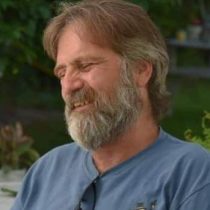 *Please note, we are operating at a 40% capacity & are following all state guidelines. Masks must be worn & social distancing must be adhered to. Please visit our home page on this website or our Facebook page for FAQs. As always, feel free to reach out with any questions.

Eli, as friends called him, joined the army at age 17 and served in Texas and Germany, which ignited a lifelong love of travel, and, of course, dark beer!  Upon discharge, Eli stayed in Germany, living in Heidelberg and meeting his wife, fellow American Joan (Gibbons).  After enjoying travels in western Europe, they returned to the United States in 1984, and traveled throughout the continental U.S. before settling in Massachusetts. There, Eli earned a bachelor’s degree in computer science, followed by a long career in computer support.

He and Joan raised two children, Tricia and Nick, who are Eli’s greatest source of pride and joy.  Along the way, the family has traveled together to many places in the United States, including the Grand Canyon, Hawaii, and returning many times to family and friends in South Carolina, New York, and Ohio.  A favorite destination was camping in the Catskills.  Eli never forgot his mechanic’s training in the army and could fix almost anything, from cars to computers.  He also liked building projects in wood.  He was very creative and a wonderful photographer, showcased by the spectacular photos taken on his travels.

Eli is survived by his wife Joan; daughter Tricia and son Nick; his family in Ohio including sisters Virginia (Tim) Braden and Heidi Heath; mother Eleanor Nelson; along with many cousins, nieces, and nephews; Gibbons in-laws; and Dodd and Goldberg families.  He was predeceased by his father, Ellis Patrick Stillwell, Sr., and two sisters, Sandy and Charlene.

Visitation will be held on Friday, February 12th from 12:30-1:30 p.m. at the Chesmore Funeral Home of Holliston, 854 Washington St. A funeral home service will follow at 2:00 p.m. The family plans a memorial celebration around Eli’s birthday in October.  In lieu of flowers, donations may be made to the Mass General Cancer Center at Newton-Wellesley Hospital, or to a charity of your choice.