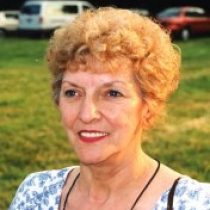 Bettsy (White) Horrigan, 89, of Holliston, passed away Friday, March 6, 2015 at St. Patrick’s Manor in Framingham. She was born in Hopedale, the daughter of the late Albert and Christine (Nealley) White. Her husband of 48 years, the late Joseph E. Horrigan, passed away in 1997.

Bettsy was a professional singer for many years performing on NBC Radio and touring with the big bands. She became an active member of the Holliston community, moving there with her family in 1958. She played a number of roles with a variety of local Community Theater groups. She started a band that plays at the Holliston Senior Center and various venues. She was a featured performer at age of 80 in AARP’s National Convention in Boston. She was active at the Our Lady of Fatima Shrine as the Choir Director for 40 years and president of the league. She co-founded the first ARC and was very involved with the Special Needs community, organizing workshops, community living, and a wide variety of art and sports programs. She was a supporter of Special Olympics and was politically active in getting services for the community.

She is survived by her children, Bob Horrigan, his wife Dottie; Joe Horrigan, his wife Patti; Kathy (Horrigan) Donnelly; her sister-in-law Mary Ann Michael and her husband Ronald of Natick, 4 grandchildren, Patrick, Dawn, Michael and Kelly and 5 great-grandchildren and another due to be born in July. She is predeceased by her son, James Horrigan who passed away in 2005 and her grandson Patrick Donnelly who passed away in 2008.

Visitation will be held on Tuesday, March 10th from 4-8 p.m. at the Chesmore Funeral Home of Holliston, 854 Washington St. www.chesmorefuneralhome.com A funeral Mass will be held at 10:00a.m. Wednesday, March 11th at the Our Lady of Fatima Shrine in Holliston. Burial will follow at St. Patrick’s Cemetery in Natick. Donations in her memory may be made to, Our Lady of Fatima Shrine
101 Summer St. Holliston, MA 01746 or to Patrick Donnelly Foundation Inc. 54 Westwood Dr. Sturbridge, MA 01566