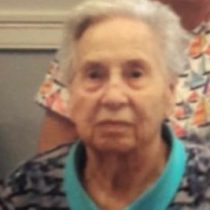 *Please note, we are operating at a 40% capacity & are following all state guidelines. Masks must be worn & social distancing must be adhered to. Please visit our home page on this website or our Facebook page for FAQs. As always, feel free to reach out with any questions.

Eleanor Katherine Dumais, 94, of Marlboro and formerly Hopkinton, passed away Friday, February 12, 2021 at Marlborough Hills. Born in Newport, VT, she was the youngest daughter of the late Kate (Chaffee) and John Lunna. She was the wife of the late Emile L. Dumais, whom she married on July 3, 1948.

Eleanor was raised and educated in the Newport Center Schools, graduating in 1944. In 1953, Eleanor and Emile moved to Hopkinton. They became members of St. Paul’s Episcopal Church and Summit Chapter 32. OES. She presided as Worthy Matron of the Chapter from 1960-1961. Eleanor then served as Deputy Grand Matron of Massachusetts, Order of the Eastern Star from 1962-1963. The following year, the Hopkinton Order of Rainbow Assembly #108 was instituted and she was elected as the First Mother Advisor of the Assembly, having served many years in that capacity. She later worked at the Dennison Manufacturing Co. in Framingham for several years in the communication and IPD departments. She belonged to the Hopkinton Garden Club, the New England Rose Society, and the Golden Age Club. She was an active member of St. Paul’s Altar Guild and had served as Directoress of the Guild for several years. In 1993, she was appointed to serve the Hopkinton Council on Aging. A year later, she became a Board Member of the Bay Path Home and Community Services Inc., and served briefly on the home care committee. Eleanor also was an amateur radio operator and member of the American Radio Relay League for many years with the call letters WA1-GEG.

Eleanor and Emile moved to Marlboro in 2000 and enjoyed retired life until Emile’s passing in 2006.  Eleanor then transitioned to Marlboro Senior Housing and eventually to Marlborough Hills Rehabilitation and Health Care Center.

Visitation will be held on Tuesday, February 23rd from 9:00 a.m. – 10:30 a.m. at the Chesmore Funeral Home of Hopkinton, 57 Hayden Rowe St. A funeral service will follow at 11:00 a.m. Burial will follow in Evergreen Cemetery, Hopkinton.