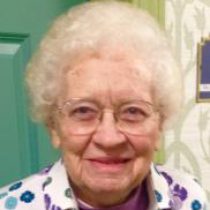 Memorial Service to be held later in the Spring

Eleanor B. (Lary) Anderson, 86, of Canaan, New Hampshire, passed away Tuesday, March 14, 2017 at the Newton Wellesley Center for Alzheimer’s Care. Born in West Canaan, NH, she was the daughter of the late Eva Vifian and Harry Foster Sr. She was the wife of the late Sidney “Sonny” Lary Jr. (who passed away in 1985) and former wife of Philip Anderson Sr.

After graduating high school, Ellie got a taste of the big city while working as a nanny for two children in NYC. She reflected fondly on the time she spent there even throughout her later years. She went on to become a telephone operator in Enfield, New Hampshire. In the years to follow, Ellie married and had two sons.

While staying home and taking care of the family, she started her own catering business. She enjoyed the art of cake decorating and catered many area events. She loved spending time with family and friends, camping, going to the beach and flea marketing. Ellie had a very strong faith and enjoyed being involved in the church community.  She participated in many social events, church suppers, craft fairs, old home days and yard sales were among some of her favorites.   Ellie enjoyed watching her family grow and took great pride in being a grandmother.

Eleanor is survived by her son Jody Lary and his wife Vickie of Hopkinton, MA; her sister, Harriette Stevens of Canaan, NH; and her granddaughter, Jillian Lary of Hopkinton, as well as many loving nieces and nephews.  She is predeceased by her son, Stacy Lary, her grandson, Tyler Lary, as well as her siblings, Harry, Eugene and Vivian Foster.

A memorial service is being planned in the spring to celebrate Ellies’ life and her call to eternity. Arrangements are under the care of the Chesmore Funeral Home of Hopkinton. www.ChesmoreFuneralHome.com