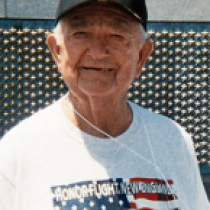 Born in Framingham, he was the son of the late Anthony and Mary
(Zaborowski) Serocki. He was the husband of the late Jennie M. (Wlodyka)
Serocki, whom he married in 1952.

A resident of Holliston since 1930, Edward was a veteran of the US Army
where he served as a Radio Sergeant from April 2, 1942 to January 12, 1946.
He was a member of the Holliston American Legion, VFW and the Polish Legion of
Americans Veterans Post 55 in Salem. Edward was retired from Stowe Woodward
and enjoyed being outside, growing vegetables, and taking care of sheep
and chickens on the farm.

He was the father of the late Edward J. Serocki, Jr. and the brother of
the late William, Joseph and Frank Serocki, Mae Szczechowicz, Anne
Dunajski and Irene Janiak.

Visitation will be held on Saturday, August 4, 2012 from 10 to 11 am at the
Chesmore Funeral Home 854 Washington St., Holliston
www.ChesmoreFuneralHome.com. A funeral service will follow in the funeral home
at 11:30. Burial will follow at a later date in St. Mary’s Cemetery of Holliston.
In Lieu of Flowers donations in his memory may be sent to the
Edward J. Serocki Scholarship Fund care of Kimberly Hidenfelter
99 Milk St., Blackstone, MA 01504