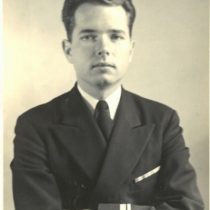 Edward J. Clancy, 86, of Framingham, and formerly Holliston, passed away after a brief illness on May 29, 2017.  Born in Framingham he was the son of the late Helen (O’Connell) and Dr. Leo J. Clancy.

After graduating from Boston College with a BA in Economics, Ed served his country in the U.S. Navy for over a decade, attaining the rank of Lieutenant. Following his honorable discharge, Ed began a career with the U.S. Government working for the Department of Defense, where he stayed up until his retirement. Ed loved fly fishing, the Red Sox and reading, especially local newspapers and national business publications.

The Clancy family would like to thank St. Patrick’s Manor in Framingham, and Whitcomb House in Milford for the loving care they provided Ed in his later years.

Calling hours will be private, followed by a funeral mass celebrated on Friday, June 2nd at 11:00 a.m. at St. Mary’s Church of Holliston. Burial will follow in the parish cemetery. In lieu of flowers, donations may be made to Project Healing Waters www.projecthealingwaters.org/ Arrangements are under the care of the Chesmore Funeral Home of Holliston. www.ChesmoreFuneralHome.com