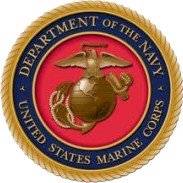 Hopkinton-
Donald William Brisco, 80, of Hopkinton, passed away Sunday, July 7, 2013 at the Milford Regional Medical Center. Born in Soldiers, Pennsylvania, he was the son of the late Maude (Lehman) and John Brisco. He was the husband of Anna Maria (Morteo) Brisco of Hopkinton.

Donald proudly and honorably served his country as a Marine from 1953-1961. He
was the Vice President of Operations at The Fair Department Store for 22 years from 1973-1995.

Besides his wife he is survived by his children, John W. Brisco, Donald A. Brisco, Bonnie J. Brisco; and his son-in-law, Mike Wooten. He also leaves behind 2 grandchildren, Daniel J. and Matthew D. Brisco.

Visitation will be held on Friday, July 12th from 5-8pm at the Chesmore Funeral Home of Hopkinton, 57 Hayden Rowe St. www.ChesmoreFuneralHome.com A funeral mass will take place at 10:00a.m. on Saturday, July 13th at St. John the Evangelist Church in Hopkinton. Burial will follow in Evergreen Cemetery. In lieu of flowers, donations may be made to the National MS Society, Greater New England Chapter P.O. Box 845945
Boston, MA 02284 or nationalmssociety.org