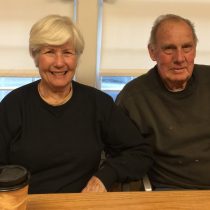 Donald Kramer, 78, of Holliston, passed away Monday, April 17, 2017. Born in Framingham, he was the son of the late Ida (Youngsma) and Gordon Kramer and married to Donna (Suarez) Kramer.  Don and Donna recently celebrated 49 years of marriage.

Since 1962, Donald was the owner of his own general contracting business, Kramer Associates; where his son Brian has worked with him for 17 years. Don’s family purchased the family farm, now known as Breezy Hill Farm,  89 years ago where he had lived his entire life. Donald’s father Gordon became a member of Mass Farm Bureau Federation in 1948, where Don and Donna are still active. He had also been the animal inspector for the town of Holliston. Don was a member of the Holliston Fire Department for 50 years and retired as a Deputy in January 2008. Donnie adored spending time at his beloved Cape home.

Besides his wife Donna, he is survived by his four children, Laura Ann Ryan and her husband Kevin of Milford, Jennifer Lee Lutton of Uxbridge, Julie Katherine Johnston and her husband Charles of Philadelphia, TN, and Brian Gordon Kramer of Framingham. He is survived by two siblings, Robert Kramer of PA, Marjorie Jensen of VT. Grampy/Pops/Pappaw also leaves behind 10 grandchildren, Bryce, Emma, James, Jeremy, Creek, Daniel, Abilene, Jessica, Jillian, and Kyker. He is predeceased by five siblings, Sarah Sherman, Harry, Francis, Gordon, and Clarence Kramer.

Visitation will be held on Sunday, April 23rd from 1:00-6:00p.m. at their farm in the riding arena,  583 Adams St. Holliston. Kindly dress casual. A funeral service will take place on Monday, April 24th in the riding arena at 12:00p.m. Burial will follow in Lake Grove Cemetery. Donations in his memory may be made to Holliston Firefighters Mutual Relief Association, 59 Central St. Holliston, MA 01746.