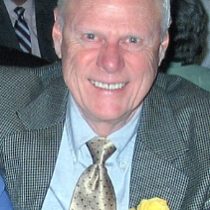 Donald Emory Hastings, 77, a Holliston resident for the past 37 years, passed away Wednesday, October 27, 2010 at the Mary Ann Morse Nursing and Rehabilitation Center in Natick. Born in 1932 in Athol, MA., he was the son of the late Emory and Natalie (Hobbs) Hastings. He was the husband to Jill (Tebbetts) Hastings of Holliston.

Donald was a graduate of Athol High School and received an engineering degree from Northeastern University. He served in the United States Navy from 1952-1956 and was employed as a communications engineer by Raytheon Company for 35 years before his retirement in 1993. After retirement, he enthusiastically pursued many interests and hobbies including; woodworking, clock making, fishing, canoeing, target shooting, astronomy, photography and traveling.

Besides his wife of 54 years, he is survived by, his daughter, Joyce E. Hastings of Holliston; his son, Bruce A. Hastings and his wife Sandra of Milford; his grandchildren, Alexander S. Hastings and Lindsey M. Hastings of Milford; a sister, Elsa R. Begor and her husband Richard of Athol, and their four children, Michelle, Kristine, Michael and Kimberly. He also leaves behind several close cousins and many good friends. He is predeceased by his son, Stuart A. Hastings who died in 1975.

Visitation will take place on Saturday, October 30, 2010 from 2-5p.m. at the Chesmore Funeral Home of Holliston, 854 Washington St. www.ChesmoreFuneralHome.com A funeral home service will follow at 5:30p.m. In lieu of flowers, donations may be made to Holliston Pantry Shelf, 23 Water St. #1F, Holliston, MA. 01746 or to the charity of one’s choice.