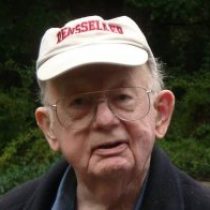 A memorial service will be held at St. Theresa’s Church, 35 S. Main Street, Sherborn, on Monday, March 3 at 10 a.m. Family and friends are also invited to visiting hours the previous day, Sunday, March 2, also at St. Theresa’s, from 3-5 p.m. Internment will follow the service at Pine Hill Cemetery, Sherborn, with a short reception afterward at St. Theresa’s. In lieu of flowers, expressions of sympathy may be made in David’s memory to Home Away Boston, http://www.homeawayboston.org/donate.html, or to Yad Vashem, https://secure.yadvashem.org/donation/.

David W. Bernard was the second of three children born in Norwalk, Ct. to Preston and Madeline Bernard. He arrived on February 5, 1926 in the midst of a historic blizzard, sending the expectant couple racing to the hospital in a horse-drawn sleigh. He grew up in Norwalk and attended Norwalk schools until, in the midst of World War II, he was chosen for an accelerated program that moved him from his junior year in high school to Rensselaer Polytechnic Institute in Troy, NY, where he earned a Bachelor’s in electrical engineering in just two years and was inducted into the United States Naval Reserve Officer Training Corps. After graduation he received his commission and was assigned to the U.S.S. Merak (AF-21), going aboard in January 1946 and serving as a deck watch officer, communications officer and division officer. In recognition of his military service, he was awarded the World War II Victory Medal. After the war, David returned to RPI for graduate study, earning a Master’s in electrical engineering in 1948.

While at RPI as an undergraduate, David met his wife, Kathleen, whose brother was David’s freshman-year roommate. They were married in her home town of Glens Falls, New York, on August 25, 1951 – the same day he’d been called to return to active duty. He managed to secure a four-month deferment, and then served as Lieutenant (junior grade) in the US Navy Reserve as ship’s technical officer. He received an honorable discharge on December 20, 1953. By then, he and Kathleen had welcomed the arrival of daughter Martha. They settled in Norwalk, where they built a home just down the hill from where David’s parents continued to live in David’s childhood home.

Over the next decade, David and Kathleen’s family grew to include Liza, Susan, Sheila, and Amy. David was enjoying a corporate engineering career, beginning at the Remington Rand Laboratory in Norwalk before taking a position at Univac Engineering Center. In 1963, he accepted a position with Honeywell in Massachusetts, and after a year of commuting, he and the family left Connecticut for Massachusetts. They settled into a newly-built house on Maple Street in Sherborn, where they enjoyed Christmas at home for the next 58 consecutive years, welcoming a family that grew to include a sixth child?their first son, Keith, born just after they arrived in Sherborn?and 10 grandchildren.

In 1968, Honeywell asked David and Kathleen if they’d be willing to move for a time to Scotland, where David would work at Honeywell’s Motherwell facility, near Glasgow. They eagerly agreed, and in short order put their furniture in storage, rented the house, and brought the entire family – six children ranging in age from 16 to 3 – to Newton Mearns, a Glasgow suburb. They remained in Scotland for two years, traveling extensively throughout that country and also, often with several children in tow, spending Easters in Ireland and summers in Europe, including a memorable day at a pub in Berne, Switzerland, watching with a group of locals as American Neil Armstrong took man’s first steps on the moon.

David and his family returned to the United States in 1970, and David continued with Honeywell until his retirement in 1988. A few years later, a search for documentation in support of a request for Irish passports led to a passion for genealogy that continued until his death, sparking what was essentially a second career, one that motivated a great deal of historical research and international travel and resulted in some fascinating discoveries. For example, relatives on both David’s mother’s and father’s sides had come to the United States from Ireland: County Waterford and County Louth. But he discovered through a long search that his paternal grandfather, David F. Bernard, was the son of Jacob Bernard, a Jewish immigrant from Bohemia. This finding opened the door to an entire branch of the family about which he was previously unaware, many of whom did not survive the Holocaust.

Not content with merely gathering names and dates, David spent countless hours poring through census documents, land records, historic newspapers and scholarly works to understand more about the people from whom he and Kathleen had descended. His began corresponding with extended members of the Sullivan and Bernard families in Ireland, Australia, Brazil, and Israel, establishing friendships and staying in contact through email, Skype, and, in some cases, in-person meetings. David and Kathleen enjoyed exploring the family’s past, traveling together to cities including New Orleans, Salt Lake City, Dublin, Warsaw, Bucharest, and Prague.

Beyond genealogy, David was known to his neighbors for the abundance of vegetables his garden produced each year, including many colorful varieties of tomatoes and a range of vegetables some were unfamiliar with, such as kohlrabi, rutabagas, and celeriac. He and Kathleen also traveled to lands with no family ties, including Russia, Norway, Sweden, Wales, and Monaco. His most recent trip, in the summer of 2011, was a return tour through Scotland, from Glasgow on the east coast to the Isle of Skye on the west. He was hoping to return to Eastern Europe, and was very pleased to learn that his grandson Thomas will be headed to Prague in the fall for a semester abroad.