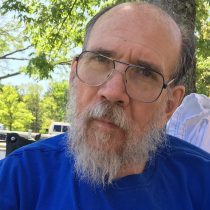 A celebration of life will be held at a later date

David W. Pierson, 72, of Hopkinton, passed away Monday, April 27, 2020 at Milford Hospital after  3 years at Golden Pond Assisted Living. Born in Waterbury, CT. he was the son of the late Edith (Wilber) and David D. Pierson. He lived most of his life in his home in Maynard, MA.

Raised in Woodbury CT, Dave was involved in Scouting, 4-H, and building, tinkering with, and fixing all manner of things, particularly electrical or mechanical. After graduating from Waterbury Technical College, he moved to Massachusetts where he worked for Digital Equipment Corp, building and maintaining computers for 30 years, traveling to Scotland and Moscow. After DEC closed, he joined the USPS, initially delivering mail and later applying his talents as a technician maintaining large mail sorting machines.

An avid railway fan, he gathered with friends on Sunday mornings to watch trains. His home, a museum of the history of all things mechanical, electronic, or military, was filled with books and ephemera documenting the development of the modern age. Collections of yankee push screwdrivers, vintage radios, phonographs, electrical meters; and operation/technical manuals for early diesel-electric locomotives and signal equipment, postcards, even early vintage computers, reflected his fondness for flea markets. Items from his shelves now are in the collections of the New England Museum of Wireless and Steam in Greenwich R.I and the Boston Museum of Science.

Photography was another hobby, resulting in a modest collection of antique cameras, both 8 mm and still.  His library included near complete collections of Tom Swift and the Hardy Boys.  His interests in print ranged from comic books, to the Proceedings of American Institute of Electrical Engineers. Miscellany included early TV, and radio equipment, parts, pieces and technical drawings, diagrams and manuals, all of which he had mentally cataloged. He could tell you just where to find whatever might satisfy your interest.

As an expert fireworks enthusiast, Dave edited the newsletter of the New Hampshire Pyrotechnics Association for many years. He tried never to miss the annual conventions of the Pyrotechnics Guild International (PGI), traveling from New England on his motorcycle. Upon arrival, he was much more than a spectator, pitching in wherever there was work to be done and entertaining the crew with jokes along the way. His standing in this fireworks community was shown by his repeated appointment as “B-line Boss”, responsible for the safe handling and firing of the largest aerial shells.

A master wordsmith, puns comprised a significant portion of his jokes, and crosswords puzzles his attention. Speculation has arisen that his well-known strategy of following a few bad jokes with a good one, led to more laughter at the good one. His breadth of knowledge sometimes left listeners missing the point, and he would then need enlighten us ordinary folks.

For Dave, summer vacation was riding his motorcycle to Sturgis, South Dakota or beyond for fireworks, motorcycle gatherings, or both. BMW awarded him a certificate attesting to more than 200 thousand miles on the road.  He visited his aunt and uncle in Connecticut before and after his trips west. He often joined his parents on Star Island, off the coast of Portsmouth NH, pitching in with the engineering or carpentry crew there. Dedicated to Edith and Dave D. in their retirement, it is doubtful he ever missed a Thanksgiving, Christmas or birthday with them once they returned ashore in their 70’s from their year-round life on Star Island.

Remembered as a gentleman, which he certainly was, he was also a gentle man, conscious and considerate of the feelings of others. His kindness, humor, warmth and encyclopedic intellect lives on in those who knew him.  Dave is survived by siblings, William of Glen Burnie, MD, Andrew of Springvale ME,, Margery Dixon of  Jarretsville, MD,  and Janaki of Woodbury CT. His four nieces, Sepedeh, Neda, Rosanna and Samantha, and two nephews Adaon and Anerin, also survive him.

Dave’s request was to be cremated. A celebration of life will be held at a later date. If you’d like to be added to a list to let you know when that will be, please email the funeral home. In lieu of flowers,  donations are welcomed to the following charities.We recommend mailing checks so your full contribution is received by the non-profit.  On-line donations are also available for most of below options

3) https://starisland.org: Morton-Benedict House 30 Middle St. Portsmouth, NH 03801. Arrangements are under the care of the Chesmore Funeral Home of Hopkinton, www.ChesmoreFuneralHome.com