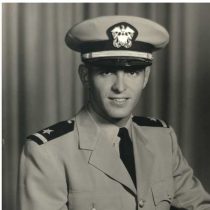 Memorial Services to be held in Holliston July 13th and in San Diego June 16th.

Danny (Dan) Jay Brunner, 82, of Albany, Oregon, passed away on December 18, 2018. Born in Los Angeles, CA, he was the son of the late Gladys (Knight) Brunner and Harold Brunner.

Dan received the first full NROTC scholarship ever awarded to a Grants Pass student.  He went on to earn a Business degree from Oregon State University.  Dan was a career Navy man, serving 20 years, including time in Vietnam; he retired a full Commander. He went on to do computer contracting with the Navy, dabbled in real estate then realized a life-long desire to be a long haul truck driver. In his final retirement, he volunteered for the American Red Cross.

Dan enjoyed fishing, boating, crossword puzzles and Sudoku. He was an avid reader, always engaged in a book, especially interested in history. Dan could often be found at a local restaurant chatting with the regulars over chardonnay.  His friends will remember him for his generosity.

Dan is survived by four children, Maile Hildenbrand, Daniel Brunner, William Brunner, and Lisa Mikklesen. He also leaves behind a brother, Gary Brunner and his sister, Myra Frank; and 7 grandchildren.