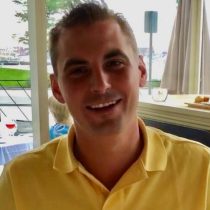 Corey had a smile that could light up a room and was a friend to all. He was personable and outgoing with a huge heart. He could talk for hours about any Boston sports team, but his passions were baseball and golf. He spent hours on the golf course always looking to better his game and was particularly proud of his low single-digit handicap.

Corey graduated from Holliston High School in 2009, where he played baseball and golf and was a member of the 2006 Division 3 State Champion Golf team. He received his BSBA in Economics from the Isenberg School of Management at UMass Amherst in 2014. He relocated to San Antonio, Texas in 2015 to work in sales for Medtronic’s Diabetes division. He was the Principal Diabetes Sales Specialist for the Chicago/Wisconsin territory and relocated to Chicago in September of 2021.

The greatest joy of Corey’s life was his family. He is survived by his loving and devoted parents Patti and Tony Ciarcello of Holliston and his younger brothers who were his best friends, Brody and Tucker as well as their golden retrievers, Boomer and Izzie. He also leaves his three childhood friends, Steve Cugini of Franklin, Pat Tehan of Natick, and John Marston of Chicago. Additionally, he leaves two uncles and an aunt as well as an extended community of friends and Medtronic colleagues who he loved and admired. He was predeceased by his grandparents, Robert and Elizabeth Charest of Franklin and Mark and Lucille Ciarcello of Melrose.

Visiting hours will be held on Saturday March 19th from 9-11:30am at Saint Matthew Parish, 105 Southville Road, Southborough, MA with a Memorial Mass at noon. In lieu of flowers, donations may be made to https://www.stmatthewcatholic-southboro.org to help raise funds for local college scholarships. The service will be livestreamed and may be viewed at: https://www.stmatthewcatholic-southboro.org/