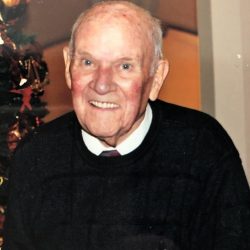 Interment to be held at a later date at Veteran’s Cemetery in Augusta, Maine

It is with great sadness that the family of Clinton P. McEachern, 94, of Holliston, announce his passing. He passed on from this earth Wednesday, March 18, 2020 to the good graces of God at the Metrowest Medical Center in Framingham. He was the loving and devoted husband of 52 years to Joan (Dugal) McEachern of Holliston.

Clint was born in Greenville, Maine on April 28, 1925 and was the son of the late Bernice (Parke) and George W. McEachern and one of nine children. He attended public schools in Greenville and later went on to receive his Associates Degree in Business from Husson University. On his eighteenth birthday he was drafted and faithfully served three years in World War II in the Army’s 569th Anti Aircraft Artillery Battalion. Clint spent his professional life working as a salesman. His customers loved his friendly personality and patience. Although Clint retired to Massachusetts to be closer to two of his children, his love of his home state of Maine remained and he would return often to visit. He could navigate the backroads of Maine like no one else and always knew a “shortcut”.

Clint loved to travel and spent many winters, along with his wife, in his favorite place, Las Vegas. Clint was passionate about both sports and politics and could often be found watching either on television. What Clint loved most of all in life was his family. His greatest pride was his children. Any accomplishments they achieved gave him great pleasure and something he would speak of proudly. Clint was also a devoted grandfather and enjoyed time with his grandchildren, whether gathering for holidays or special occasions or watching his grandchildren play sports. Clint will be most remembered as an easy-going and kind person who always had a beautiful smile ready and a joke to tell.  His quick-wit and funny jokes will be missed by all who knew him!

Besides his wife, Clinton is survived by five children, Scott McEachern of Bowdoin, ME, Debora Pendexter and her husband, Curtis of China, ME, Clinton “Chuck” McEachern of Waterville, ME, Mark McEachern and his wife, Agatha and Brenda Bernard and her husband, Steve all of Holliston. He also leaves behind his grandchildren, Ian McEachern, Jodi Beckwith, Amy Bryant, Erica Goss, Ashley McEachern, Aidan and Gavin McEachern, Nicholas, William and Danny Bernard; as well as many nieces and nephews. He is predeceased by his first wife, Elizabeth McEachern, his son, Michael McEachern and granddaughter, Scarlett McEachern.

At this time no memorial services will be held.  A celebration of life will be held at a later date and internment will take place at the Veteran’s Cemetery in Augusta, Maine. In lieu of flowers, donations may be made to St. Jude Children’s Research Hospital . Arrangements are under the care of the Chesmore Funeral Home of Holliston, www.ChesmoreFuneralHome.com