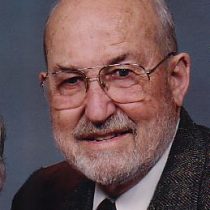 HOPKINTON – Clifton Lewis Gilson, 85, died Tuesday, Jan. 30, 2007.
He was the husband of Mary (Prifty) Gilson for 45 years.
Born in Gardner, son of the late Bertha (Forristall) and Walter L. Gilson, he went to Mt. Hermon School in Northfield as a member of the Class of 1939, and graduated from Cushing Academy, Class of 1940.
He received his associate’s degree from Becker Junior College and a batchelor’s degree in business from Clark University.
Mr. Gilson was a member of the Westborough Congregational Church for more than 30 years, where he served as a deacon.
He was treasurer of Worcester Buick Co. and continued with Kelly Buick Co. He enjoyed hunting and fishing in Maine and had spent several years involved with tournament fly casting.
He left his accounting career to establish a full-time antique business until his retirement a few years ago. He was acknowledged as a historian of antiques and developed an extensive reference library. He was involved with several historical societies, and had served as president of the Suburban Antique Dealers Association.
He earned the rank of Eagle Scout and went on to become a Scout leader for many years.
A member of the Hopkinton American Legion, McDonough – Carlber Post 202, He served his country in World War II in the U.S. Navy, achieving the rank of signalman first class. His service placed him patrolling the East Coast and later helping to establish an air base on the Azores Islands.
Besides his wife, he leaves two daughters and two sons, Sharon L. Miller of Gainesville, Va., Gail D. Ojala and her husband, Leo, of Shelburne, Clifton L. Gilson Jr. and his wife, Anne, of Midlothian, Va., and Jonathan L. Gilson of Grafton; his grandchildren, Dawn Kennedy, Jeffery Miller, Christina Boyd, Jeffery, Davin and Nicholas Ojala, and Ariel, Alexander, Matthew and Caroline Gilson; four great-grandsons, Davin Z. and Rowan Ojala, and Seth and Daniel Boyd. Mr. Gilson is also predeceased by a daughter, Jane Karen Gilson and a brother, Walter L. Gilson Jr.
A funeral service will be held Saturday, Feb. 3, at 11 a.m., at the Westborough Evangelical Congregational Church on Church Street, Westborough.
Visiting hours will take place Friday, Feb. 2, from 4 to 8 p.m., at the Chesmore Funeral Home, 57 Hayden Rowe St., Hopkinton. www.ChesmoreFuneralHome.com
Memorial donations may be made to the Westborough Evangelical Congregational Church Memorial Fund, Church Street, Westborough, MA 01581.