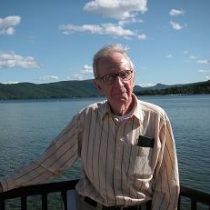 Clifford N Geary, beloved husband of the late Marguerite H Geary, died on May 31, 2008 at Milford Hospital after a sudden stroke. Cliff was born February 26, 1916 in Somerville, MA and grew up in Cambridge where he graduated from Rindge School of Technical Arts, class of
1934. He was a Drawing and Painting major at Massachusetts College of Art where he graduated with the class of 1940, earning a Bachelor of Fine Arts degree. He continued his studies at the Art Students League of New York, working for some time as an assistant instructor under his teacher and mentor, Frank J Reilly, remaining a life long member of the League.

He is best known as a science fiction illustrator due to his collaboration on Robert Heinlein’s early children’s books and Margaret Hyde’s science texts. Cliff wrote and illustrated his own children’s book, Ticonderoga, which was sold in the fort’s gift shop. He was commissioned to design bronze commemorative plaques for the fort’s bicentennial celebration. His design was adapted for a Wedgwood commemorative plate which was also sold at the fort. Most of his life was devoted to the Fine Arts, primarily oil paintings, though he experimented with many mediums including watercolor, woodworking and metal work. He showed regularly in the Washington Square (Village) Art Shows, and was an invited member of the Salmagundi Club. He and his wife Marge lived Brooklyn, then Astoria, NY, retiring to their summer home in the Adirondacks in 1981. There, they enjoyed gardening, hiking, camping and canoeing. Marge predeceased Cliff in 2007. Cliff spent much of the past year and a half with a niece in MA seeking treatment to preserve his remaining eyesight. He is survived by art school friends Don Spitzer, Edward “Shadow” Malsberg, a brother in law in FL, nieces, nephews, and friends.

At Cliff and Marge’s request, no memorial services were held. Interment at May Memorial Cemetery in Hague, NY will be private. In lieu of flowers, donations can be made in Cliff and Marge’s memory to Lake George Land Conservancy P.O. Box 1250 ? Bolton Landing, NY 12814.