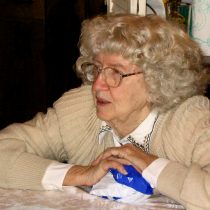 Burial will be held privately

Charlotte B. (Lane) Fargo of Hopkinton, Massachusetts passed away on August 6, 2017, at age 96. She was the wife of the late George A. Fargo, Sr. of Hopkinton and sister of the late Evelyn Read of Holliston, Mass.

Born on September 15, 1920 in Framingham, MA, Charlotte was the daughter of Charles and Mattie (Rowe) Lane, and she graduated from Framingham High School. She married George A. Fargo, Sr., in 1943, and they moved to Hopkinton in 1949, where she lived for the next 68 years.

A firm believer in the value of education, Charlotte received a bachelor’s degree from Framingham State College, a Master’s Degree from Boston University, and a Certificate of Advanced Graduate Studies (CAGS) from SUNY Buffalo.

Charlotte taught in Medfield and Hopkinton, MA, before joining the Framingham, MA, school system where she started as an elementary school teacher before becoming a remedial reading teacher at the Hemenway School for the rest of her career. When she retired, a memorial plaque was placed in the school’s lobby in her honor and it remains there today. She also taught courses in reading at Framingham State College for a few years and was an active member of the college’s Independent Alumni Association. She traveled frequently with the Holliston Senior Center, visiting most of the European countries, but one of her favorite places was Rockport, Mass., where she spent many summers as a child on Front and Back Beach. As an adult, she frequently returned to Rockport to visit and enjoy the area.

In her personal life, Charlotte took great pride in orchestrating birthday parties for her children and grandchildren (even when they may not have wanted one), and stoically tolerated the assorted shenanigans that happened at these events. Charlotte was an avid gardener, spending many hours in her flowerbeds. She was almost as passionate about the Red Sox and Patriots as she was her beloved books, and followed the exploits of Big Papi and Tom Brady with enthusiasm. Her family and friends will remember her fondly not only for her generosity and independence, but also for her complete lack of culinary skill in the kitchen and her belief that no vegetable was fit to be eaten until it had spent adequate time in the pressure cooker.

Charlotte is survived by her three children, George A. Fargo, Jr., of Steamboat Springs, Colorado; Kathryn (Fargo) Hamilton and her husband, Harry, of Hopkinton, Massachusetts; and James Fargo and his wife, Linda, of Reading, Massachusetts.

In addition, she is survived by her grandchildren, Susan Hamilton and her husband, Jeff DePiero, of Franklin, Mass.; Casey Fargo, and his wife, Jennifer, of Dallas, Texas; and Sam, Abigail and Ryan Fargo of Reading, Mass., as well as three great-granddaughters Katherine, Adelaide, and Juliet Fargo of Dallas, Texas, and her niece, Barbara Goulding of Holliston, Massachusetts.

In lieu of flowers, the family requests that donations be made in Charlotte’s memory to the Independent Association of Framingham State Alumni, 42 Adams Road, Framingham, MA 01702.

“There is no such thing as a child who hates to read; there are only children who have not found the right book.” – Frank Serafini