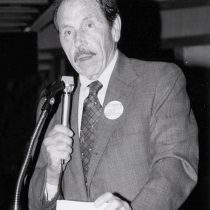 A man whose ultimate challenge was to discover the meaning of life, Charles Moran Zettek never shied away from service to others through his military, professional and civic duties.
Charles, 89, passed away on June 17, 2011. A memorial service open to all will be held on Saturday, August 13, 2011 at 11AM at St. Mark’s Episcopal Church in Southborough, MA.

Charles served the Town of Hopkinton as a volunteer for decades, culminating in fifteen years as Town Moderator, where he drew praise from a fellow Town leader who wrote that his “good sense, good humor, wisdom and knowledge of town affairs and of the conduct of town meetings have enabled the town to debate issues which could potentially have been extremely divisive in a manner which permitted all parties to speak their peace and yet remain civil.” Professionally, he served as the City of Lowell’s first City Planner and for many years as the Executive Director of the Worcester Redevelopment Authority

Charles was born in Dwight, Kansas to Anna and Frank Zettek on September 22, 1921. Along with his sisters Selma and Shirley, he was raised in San Leandro, California, where he was noted in a local paper for being a “star athlete at San Leandro High School.” Like many other young Americans, he enlisted shortly after Pearl Harbor and was assigned to train in the U.S. Army Air Corps.

In 1943, he was assigned to England, where he flew 27 missions as Captain and Lead Bombardier in a B-17 in the 388th Bomb Group – Eighth Air Force. Despite having completed his required tour, he volunteered to lead a pioneering bombing mission that flew over Germany and landed in Russia. Charles received the Distinguished Flying Cross for Valor in Combat three times and the Air Medal that was given to survivors of twenty five missions in B-17’s.

Published accounts of the heroic achievements of the Eighth Air Force noted “his coolness under combat conditions” and a bombing record that “tops that of any other in the 388th Group, and is probably one of the best in the Eighth Air Force”. He was lauded for developing a grid system for bombing that was even “used with success … and taught to the crew bombardiers in B-29’s and B-50’s used by the Strategic Air Command in 1951”.

His military service had a profound impact on Charles and, after graduating Magna Cum Laude from Harvard University in 1949, he earned a Master’s Degree in City Planning from Harvard’s Graduate School of Design. Charles was profiled as a WW II veteran who was dedicating his life to improving conditions in post war America. A 1946 Saturday Evening Post article was titled “The Bombardier Who Would Build Cities” by Richard Tregaskis, who wrote, “Chuck Zettek has uncovered the energy that gives power to each new generation – the blind struggling energy that bubbles over the established prejudices and practices set up by men grown faded in hope and enterprise.”

After moving to Hopkinton with his wife and a young child in 1952, Charles channeled that energy into decades of service as a city planner and as a public servant. His early professional career featured work as the Planning Director for the Worcester Housing Authority and, beginning in 1955, he began his tenure with the City of Lowell. Along with the construction of the Lowell Connector, the preservation of mill buildings and the redevelopment of the downtown area, one of his planning projects earned Zettek national recognition as “the first renewal project completed in the country during that time.” Charles returned to Worcester in the 1960’s as the Executive Director of the Worcester Redevelopment Authority where he spent significant time guiding the renewal and growth of the city.

His other love was Hopkinton, where his family still resides. Fittingly, he began his service on the Planning Board and helped develop the Town’s first master plan titled “Hopkinton’s Plan for Desirable Growth” in 1957. Along with decades on the Planning Board, Charles served for more than a dozen years on the Conservation Commission and in other appointed positions such as the Elmwood School Building Committee.

Charles was an avid reader and prolific writer, published poet and author of a book titled, “The Ten Most Important Words In Your Life”. He also was awarded a U. S. Patent for a unique time-keeping device that allows individuals to keep track of personal time as a way of maximizing self realization. He enjoyed many other activities such as drawing, woodworking, building stone walls, photography and playing sports with family and close friends. For almost sixty years, Charles was an active member who served in many capacities at St. Mark’s Church in Southborough.

Charles is survived by his loving wife of sixty two years, Anne (nee Ewing), his children Charles Jr. (Judy), Anne, Michael (Barbara), Sarah and Matthew (Cindy), eight grandchildren, and family in California and Ireland. In lieu of flowers, donations may be made to Habitat For Humanity or the Friends of the Hopkinton Library.

His family wishes to express their deep gratitude to the staff at the Hearthstone Alzheimer facility in Marlborough, who cared for Charles during the last few years and to the citizens of Hopkinton for their kindness over the decades. He will be missed by his family, friends, his community in Hopkinton, residents of the cities where his planning legacy lives on and by all who have been touched by his wit, charm and intellect.