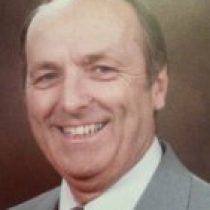 Medway-
Charles (Chuck) Thomas McNeillie peacefully passed away on the evening of June 13, 2014 at age 81, surrounded by his family. He was the beloved husband of Coleene (McNaughton) McNeillie for 57 years. Born February 27, 1933 in New Bloomfield, PA, he was the son of the late Andrew and Mary (Lebo) McNeillie.

After graduating from Perry Joint High School in New Bloomfield and attending Penn State University, Mr. McNeillie worked 4 years for the U.S. Air Force as an instructor for the Matador Missile School. He worked in many locations around the world including Germany, Columbia, Panama, Puerto Rico and Hawaii. While employed at the Martin Company, Chuck worked on installing the Mace Tactical Missile in Germany and on the Gemini missions at Cape Canaveral, FL. In 1972 Mr. McNeillie settled in Medway, MA and began over 40 years of employment with GZA Corporation. After retiring at age 65, he continued working as a consultant for a variety of companies until his recent illness.

A man of immense faith, he was a member of First Baptist Church of Holliston, MA. His interests included camping and playing golf.