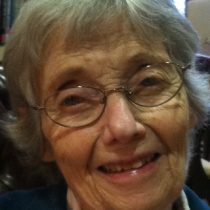 Catherine Mary (Dempsey)Cummings,93, of Franklin, died in the early morning hours of June 10, 2016 at home with her daughter by her side. Catherine was born to John and Mary (Lloyd) Dempsey in New York City 9/10/1922, was raised in Queens alongside her younger, adored brother Jack.

Catherine was an educator, graduating from SUNY Albany with a Master of Library Science Degree, later teaching in a Latham, NY Middle School. She was an avid gardener, cultivating multitudes of roses at her Schenectady, NY home of 28 years. She was a bird enthusiast, yoga master, environmentalist, and world traveler. Catherine wedded the love of her life Robert Francis in 1949 and was genuinely, happily married for 64 years, until Bob’s passing in 2013. She was first mate aboard their 39’ sailboat, Tara, enjoying many boating adventures in their retirement years and living in the Berkshire Mountain’s Town of Greenfield.

A graveside funeral service, interring Bob & Catherine, will be held on Saturday, June 18th at 11:00a.m. at St. Mary’s Cemetery in Turners Falls, MA. In lieu of flowers, donations may be made in her memory to the American Museum of Natural History’s Center for Biodiversity and Conservation, Central Park West & 79th St, New York, NY 10024 or to a charity of one’s choice.