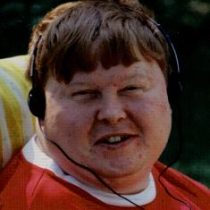 Brian P. Elliott, 44, of Holliston, died Thursday, December 28, 2006 at
the Metrowest Medical Center in Natick. Born in Framingham, he was the son
of Mary Ellen (DePaolo) Elliott of Holliston and the late Roger Elliott who
passed in March.

A proud lifelong resident of Holliston, he was active in St. Mary’s Church and
who had the nicknames of the Mayor of Holliston and Big Red. He was
involved in the Special Need’s Program at the church for over 20 years. He
was an avid Patriots fan and was a dedicated listener of Oldies 103.3. He had
countless friends everywhere including those at the Michael Carter Lisnow Respite
Center in Hopkinton, and Franciscan Hospital in Brighton.

Fondly remembered by his cheerful attitude towards life, which touched everyone he
encountered. Brian was a true example of love with out any condition and will be
sorely missed.

Besides his mother, he is survived by 3 brothers, Michael and his wife Kim
of Sturbridge, Kevin and his wife Kim of Brimfield, and Peter and his wife
Taitia of Frederick, Maryland. He leaves behind 7 nieces and nephews,
Colin, Cameron, Patrick, Megan, Lizzy, Emily and Ashley. He also leaves
several aunts, uncles and cousins.

Calling hours will take place, Tuesday, January 2, 2006 from 2-4pm and
6-8pm at the Chesmore Funeral Home of Holliston, 854 Washington St. (Rt.
16). www.chesmorefuneralhome.com A funeral mass will be celebrated,
Wednesday, January 3, 2006 at 10:00a.m. at St. Mary’s Church in Holliston.
Burial will follow in the parish cemetery. Donations may be made in his
memory to The Michael Carter Lisnow Respite Center, 112 Main St.
Hopkinton, MA 01748.