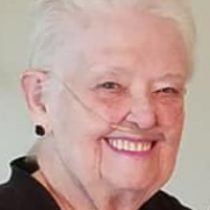 Barbara E. (Eames) Richardson, 79, of Holliston passed away Wednesday, July 11, at Rose Monahan Hospice House, in Worcester, with her family by her side. Born in Skowhegan, ME on December 10, 1938, she was the daughter of the late Ruth (Craig) Whyte and William J. Eames. She was the wife, of the late, Timothy L. Richardson.

Barbara grew up in Skowhegan, graduating high school in 1957, where she was a cheerleader. Over her lifetime, she enjoyed dancing and drawing, but loved her family and friends above all else. She especially adored each of her grandchildren.

Barbara was an active member of St. Mary’s Church, in Holliston, for many years where she and her husband taught C.C.D. and were also Presidents of the Mr. and Mrs. Club.

After holding a number of jobs, Barbara was a stay at home mother for many years. After her children were grown, she became a member of The Heritage Artisans where she displayed some of her own artwork. Her final job was with Dr. Alan Resnek, DDS as a receptionist.

Barbara and her husband retired to Burleson, TX for a short time. Upon her husband’s death, she returned to Holliston, where she lived at Cutler Heights and became the surrogate mother, grandmother, and friend to many of the residents.

She is survived by her three children, Timothy L. Richardson Jr. and his wife, Rene, of Lancaster, MA, Janna (Richardson) Vogel and her husband Stephen of Pomfret Center, CT, and Peter K. Richardson and his wife, Sara of Gallatin Gateway, MT and one sister, Margaret “Penny” Yakel. She also leaves behind her cherished grandchildren, Sarah and Mark Vogel, Mia and Samuel Richardson, and many nieces and nephews.

A memorial mass will be held 9:00 AM on Saturday July 28, 2018 in Saint Mary’s Parish of Holliston. A private interment will take place for family members only. In lieu of flowers, contributions may be made to: The Rose Monahan Hospice House, 10 Judith Road, Worcester MA, 01602, in memory of Barbara Richardson. Arrangements are under the care of the Chesmore Funeral Home of Holliston, www.ChesmoreFuneralHome.com