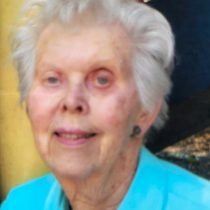 A memorial service will be held on Saturday, July 10th at 2:00 p.m. at Delmar Presbyterian Church

Barbara grew up in Orono, Maine, and graduated as valedictorian from Orono High School. She graduated in the first class to major in Occupational Therapy at the University of New Hampshire. A self-declared “Mainiac”, she loved Maine, the changing seasons and the ocean.

Barbara was predeceased by her husband of 48 years, Melvin D. Carey, in 1994. They had lived in Brooklyn, Floral Park (on Long Island), and Delmar, New York. She is survived by her three daughters: Judith Davidson (Richard) of Altamonte Springs, Florida, Marte Carey of Delmar, New York, and Patience Carey of Holliston, Massachusetts. She was the cherished grandmother of Chris and Scott Davidson, Julie Leonard, Aaron Snead and Lisette Pylant, and a great grandmother of eight.

Barbara played a major role in raising Lisette and took pride in the arts, sports and academic achievements of all of her family. Barbara had a career in occupational therapy at the VA Hospital in Albany, NY, first at the Day Treatment Center, and later as head OT in the Psych Department. Following her husband’s stroke in 1970, she was instrumental in starting the Albany Post Stroke Association in 1977. She continued to be active with this group for over thirty years, helping stroke victims find best therapies and support. Barbara was a member of the Albany Friends Meeting where she served in many capacities including First Day schoolteacher, Peace Camp counselor, and on the Trustees Committee. It was always her desire to seek peaceful solutions to social and economic injustice. Barbara joined “Grannies for Peace” in her later years and participated in local initiatives for peace and social change. She had a life-long love for animals, especially cats. One of her volunteer activities was as a “side walker” at a therapeutic riding program where she assisted challenged individuals to experience the joys of horseback riding. Barbara was a friend to all, giving her time and energy to those who needed her support. She truly lived her best life, and will be greatly missed by her loving family.

A memorial service will be held July 10th at 2pm at the Delmar Presbyterian Church 585 Delaware Ave. Delmar, NY. Donations in her name may be made to the Albany Friends Meeting at 727 Madison Avenue, Albany, New York 12208, or an animal charity of your choice.