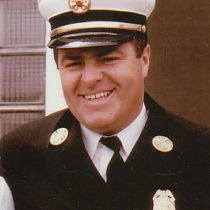 Hopkinton – Arthur P. Stewart, retire Hopkinton Fire Chief, 73, died Sat. Sept. 21, 2002
at the Sunbridge Nursing Home in Milford following a long illness.
He was the husband of Florence (Rice) Stewart for almost 54 years.
He was born in Milford, the son of the late Preston and Cynthia (Clough) Stewart and was
a lifelong resident of Hopkinton.
After graduation from Hopkinton High School, he served in the U.S. Navy aboard the
aircraft carrier USS Boxer during the Korean War.
He was an active member of the Hopkinton Fire Department for over 40 years. He was
employed at Farrar Co. in Woodville for several years, also at Pyne Sand and Stone of
Hopkinton.
In 1964 he was appointed Hopkinton’s first full-time fire chief upon the sudden death of
Fire Chief Joseph V. Pyne. He served as Chief for 22 years until retiring in 1988. He then
was employed at E. J. Murphy Co. in Woodville.
He was an avid fisherman and enjoyed spending time on his boat in Narragansett Bay.
He was one of the original founders of the Massachusetts Fire Fighting Academy, a
member of the Fire Chiefs Association of MA, member of the Blackstone Valley Fire
Assoc. and honorary member of the Woodville Rod and gun Club as well as a member of
the Woodville Baptist Church.
Besides his wife, he is survived by four sons; David, John and his wife Susan, Andrew and
his wife Peggy, James and his wife Janet and one daughter Cynthia Capobianco and her
husband Joseph all of Hopkinton. He is also survived by a brother; Richard C. Stewart
and his wife Janet of Hopkinton and ten beloved grandchildren; Danny, Brian, Meghan,
Jamie, Jenna, Jonathan, Joel, Raymond and Anna all of Hopkinton, Nicole of Middletown,
CT and several nieces and nephews.
Calling hours, at the Chesmore Funeral Home, 57 Hayden Rowe St., Hopkinton will be
Tuesday from 4:00 – 8:00 p.m. The funeral will be held on Wed. at 11:00 a.m. at the Woodville Baptist Church. Burial will follow in Evergreen Cemetery, Woodville.
In lieu of flowers, donations may be made in his memory to either the Woodville Baptist
Church, 249 Wood St., Woodville, MA 01784 or the Hopkinton Ambulance Fund, 18 Main St., Hopkinton, MA