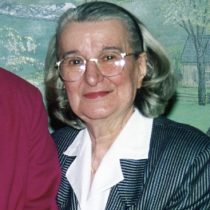 Anna Marie (Ioli) Sandi, 90, wife of the late Peter A. Sandi, passed away peacefully on April 7, 2012 after a brief illness. She was a faithful member of St. Mary’s Parish in Holliston. Anna was born in New York City on January 26, 1922 to the late Frank and Mary (Quintiliani) Ioli. She was the sister of the late Eva Guadi of Naples, Florida and the late Nicholas Ioli of Mission Viejo, California. Anna was a proud graduate of the prestigious Julia Richman High School and worked in Manhattan’s financial district before her marriage in 1942. After World War II, Anna and her husband, Peter, moved to the Fordham section of the Bronx and raised three beautiful children: Mary Ann Ballaro (married to Pasquale “Pat” Ballaro) of St. James, New York, Reverend Monsignor Thomas P. Sandi of Shrub Oak, New York, and Yvonne S. Racine (married to Leo Racine) of Holliston.

In 1967 Anna and her family relocated to Conyngham, Pennsylvania, where they spent twenty-six very happy years. She and her husband retired and moved to Holliston in 1993. In addition to her three children, Anna is survived by six grandchildren, Beverly Ballaro of Lynnfield, Sherrie Laimo of Melville, New York, Samantha Huxtable of Nesconset, New York and Rebecca, Madeline and Elizabeth Racine, all of Holliston. She also leaves behind seven great-grandchildren, Peter, Jake, Brian, Anna, Emma, Thomas and James.

In lieu of flowers, donations may be made to MetroWest Home Care and Hospice, 85 Lincoln Street, Framingham, MA 01702 or St. Mary’s Parish, 8 Church Street, Holliston, MA 01746.