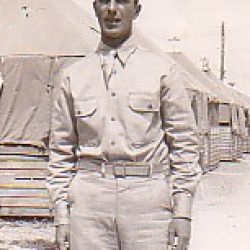 Hopkinton – Angelo L. Colella, 91, died November 17, 2005 at the Oak Knoll
Health Care Center in Framingham.
He was the husband of Dorothy (Howland) Colella. They had been married for
60 years.
Born in Newton, he was the son of the late Nicholas and Theresa (Luciano)
Colella. He was a resident of Hopkinton since his youth.
Mr. Colella had been the store manager of Colella’s Super Market in
Hopkinton where he was always to be seen busy at work but always with a
moment to great the patrons and exchange a few words. As a youth and prior
to being the first Hopkinton man to be drafted, he worked at the Colella
Dairy Farm. A veteran of the U.S. Army he served in WWII; he had formerly
been an active member of Sub District 9 and the American Legion
McDonough-Carlberg Post 202 for whom he had served nearly three decades as
the Post’s commander. He had also been a long time member of Sub-district 9,
a member of the Knight’s of Columbus in Ashland and the Woodville Rod and
Gun Club. He will be missed at the Hopkinton Senior Center Wednesday
breakfasts. Mr. Colella had always been generous by sharing the bounty of
his annual vegetable garden.
Besides his wife, he is survived by his sons, Robert L. Colella and his
wife, Suzanne, of Hopkinton and Thomas J. Colella and his wife, Wendy, of
Hopkinton; brother, Joseph Colella of Hopkinton; sister, Marie Fleming of
Hopkinton; sister-in-law, Charlotte Colella of Hopkinton; grandchildren,
Teresa, Susan, Kristin and Brian Colella and Jeffrey Tomaso; and two great
grandchildren, Samantha and Michael Colella.
He was the father of the late Michael Colella and brother of the late
Alexander and Daniel Colella and Lucy O’Halloran.
The funeral, with military honors, will be held from the Chesmore Funeral
Home, 57 Hayden Rowe St., Hopkinton with a mass of Christian burial
celebrated Monday, November 21 at 10:00 a.m. at St. John the Evangelist
Church, Hopkinton. Burial will follow in the family lot in St. John’s
Cemetery, Hopkinton.
Visiting hours, at the funeral home, will be Sunday from 2:00 – 5:00 p.m.
In lieu of flowers, donations may be made to the Friends of Hopkinton Senior
Citizens, Angelo Colella Memorial Fund, 18 Main St., Hopkinton, MA 01748
The fund will be used to build the veterans and patriotic reflection area at
the new Hopkinton Senior Center.