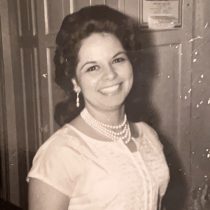 Angela Velazquez, 84, of Hopkinton, passed away at her home on Tuesday, September 28, 2021. Born in Ponce, Puerto Rico, she was the daughter of the late Felicita (Diaz) and Bautista Leon. She was the wife of the late Florencio  Velazquez.

Florencio and Angela first met when introduced on a New York City subway by Florencio’s brother, Pete. The romance was almost derailed “pun intended” when Florencio’s first words to her were, “you are such a pretty woman but I almost didn’t see you under that ugly hat!” Florencio and Angela were blessed with nearly 50 years of marriage prior to his passing. She was honored by his total devotion and strength of character for her which any woman would’ve given everything to have experienced.

Angela was a noted aesthetician in the competitive beauty industry on Long Island, New York. Previous to owning her own business, she was a trailblazer in the garment industry as one of the few female executives in charge of operations for the Fairfield Noble corporation in Farmingdale, New York. She passed on her love of five star restaurants along with Broadway theater and the arts to her children. Many happy family trips were made on the Long Island Rail Road into the city to enjoy the best the city had to offer.

Angela is survived by her daughter, Marjorie Reiman and her husband, Mark of Holland, MI; two granddaughters, Sydney and Taylor Velazquez of Tampa, Florida and Hopkinton, Massachusetts, respectively, along with a host of brothers, sisters, nieces ,nephews and cousins. She is predeceased by her son, Joseph Velazquez.

Private family arrangements are being planned, with interment at Pinelawn Cemetery in Long Island, New York. Arrangements are under the care of the Chesmore Funeral Home of Hopkinton.