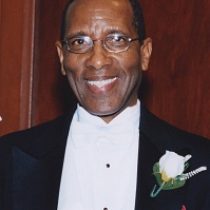 Alphonso Howard Marsh Jr., 72, of Pflugerville, Texas and formerly of Medway, MA., passed away Sunday, January 9, 2011 at Hospice Austin’s Christopher House in Austin, TX. Born in Prichard, Alabama, he was the son of the late Alphonso H. Marsh, Sr. and Augusta (Barney) Marsh.
Alphonso, called “Al” by those who knew him, was an eternal optimist who never let the obstacles of life outweigh his many successes. Whether it was growing up strong and in defiance of a still segregated South, graduating at the top of his electrical engineering class at Howard University, or losing his first wife to a prolonged battle with cancer, Al displayed a limitless capacity to persevere, to love, to forgive and give of himself.
The Austin Area Urban League named Al Marsh “Volunteer of the Year” in 2000. But his service to others isn’t measured only by the many awards and accolades received, but also in the character of those he mentored as well as those who loved him.
Mr. Marsh would say his life inspiration came from his mother Augusta Barney and his grandfather Joshua A. Barney. Both were civil rights trailblazers.
An electrical engineer by trade, Al Marsh was always committed to career and community. He served as President of the Massachusetts Society of Professional Engineers, where he was instrumental in popularizing the National Society’s MATHCOUNTS program – a competition designed to encourage middle school students to excel in mathematics.
In Medway, Al Marsh served as Vice Chairman of the School Committee and Chairman of Medway’s Planning Board. He also held positions on the Superintendent’s Budget Advisory Committee and Medway High School’s Computer Advisory Committee. Marsh served as a Deacon at the First Congregational Church in neighboring Holliston, MA. He also served as Cub Scout Committee Chairman in Medway and Sudbury, MA., where the Marsh family lived for ten years.
In Texas, in addition to his work with the Austin Area Urban League, Marsh also served as Planning and Zoning Commissioner for the City of Pflugerville, TX.
His talent as an electrical engineer took him quite literally, to the North Pole, as well as on projects across New England, Colorado’s Rocky Mountains, central Texas and other destinations like Greenland.
Al Marsh, a renaissance man, also dabbled in media: he conducted a local cable show featuring Medway community leaders and town officials. Few knew of his poetry skills, but Marsh authored more than a dozen technical and literary publications including the fictional, interactive CD, “The Lord McBee and His Sailing Ship,” published in 2002.
Mr. Marsh enjoyed bowling, golfing, fishing, and starting up his internet business lifestyles company, amongst other hobbies. He was a member of the Wayland Rod and Gun Club and the Suburban Sea and Surf Club.
Al Marsh was a member of the Institute of Electrical and Electronic Engineers, Tau Beta Pi Engineering Honor Society, and the National Society of Professional Engineers, holding office and serving on the Board of Directors at both chapter and state levels.
He is survived by his wife, Elizabeth (Wiggins) Marsh of Texas. Besides his wife, he is survived by 2 sons, Preston Marsh and Alphonso Van Marsh. He also leaves behind 6 brothers, Julius, Lonnie, Thomas, Douglas, Milton, and Roger Marsh and 2 sisters, Alice Lyles, and Deborah Marsh. He is predeceased by his first wife, June (Peterson) Marsh, who passed away in 1986.
Visitation will be held on Saturday, January 22nd from 9:30-10:30am at the Chesmore Funeral Home of Holliston, 854 Washington St., Holliston, Massachusetts (www.ChesmoreFuneralHome.com).
An 11:00a.m. service will take place in the funeral home following visitation. Burial will follow in Lake Grove Cemetery in Holliston. He will be laid to rest next to June Marsh, his first wife and mother of his children.
In lieu of flowers, remembrances may be made to the re-named “Alphonso H. and June E. Marsh Memorial Scholarship” care of Jennifer Lisk, Chair, Scholarship Committee, Medway High School, 88 Summer St. Medway, MA 02053