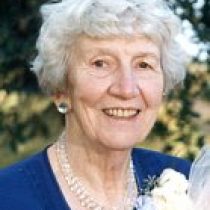 An expert florist who graduated with a degree from Stockbridge School of Horticulture in 1944 – U-Mass Amherst after graduating Amherst High School in 1942. She grew up in Charlmont, Massachusetts (Berkshires) the daughter of Tracy B. Slack of Thetford, VT, a land Surveyor for the state of Massachusetts and her mother Nelle (Swanburg) Slack of Cape Sable, Nova Scotia who was a Boston Simmons College Graduate . Alice and her siblings skied to school from her rural home in the Berkshires and hid her ski’s in the snow for the return trip (uphill both ways I believe she might say).

Alice was a accomplished organist-choir director at Hopkinton Congregationalist and was a Upton United Parish Choir member for many years with her daughter Roxanne and granddaughters Heather and Erin.

She was a key “HALT” activist (Hopkinton Against Land Takeover) in stopping the takeover of neighborhoods in Hopkinton, Ashland, Framingham, and Natick for the construction of a massive supersonic airport in the 1970’s and led the drive to repair and install a copper and tile roof on the Hopkinton Library. She also was a Hopkinton cemetery commissioner, worked part time for “Mothers Helper”, “Fuller Brush”, and Prime Computer at the Reception Desk and of course with 6 kids, a homemaker.

She began her career as a florist at Carbones Floral shop in Boston, where my father was contracted to perform electrical work with his fathers Electrician business. He asked her for her number and she said “It’s in the book”. He didn’t give up and they were married shortly after.

Alice had a great sense of humor and used to dance around the kitchen and once proclaimed after I asked her to listen to one of my records “Your daddy may not rock and roll but your momma does dance” . She helped renovate a factory building in Ashland into a house with our father and assisted him when he purchased and ran a blacksmith shop in Framingham. Over the years she helped him physically build her house with the help of her 5 oldest children, assisted him in all aspects of running his machinist and tool shop while inspiring her children in art, music, horticulture needlecraft, and performing magic and illusion. After her husband died, she became a big help to her grandchildren while she began some travelling in the US, Canada and to Europe to see the Passion Play.

Memorial services will be held on January 14, 2012 at 10 AM at Upton United Parish, 1 Church St. Upton, MA where she was a choir member.

Donations in her memory may be sent to:

or, King Philip Music Association – Fund to support a gifted music student who has financial need . Her Grandson Christopher is an Alumni & Berklee Coll. of Music student and Alice was an accomplished Pianist/Organist.
KPMA PO Box 508 Wrentham, MA 02093. Please indicate that your contribution is being made to the Alice Palmer Memorial Grant. Checks should be made out to King Philip Music Association. Your contribution is tax deductible. KPMA’s tax ID# is 04-3281707, or