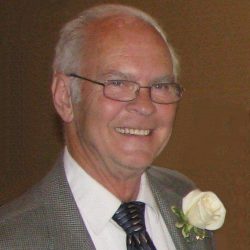 Theodore “Ted” Alvin Hatch, 84, of Holliston, passed away at his home on Friday, November 29, 2019.  Born in Newton, he was the son of the late Frances R. (Anderson) and Willard G. Hatch. He was the husband of 60 years to Diana (French) Hatch of Holliston.

Ted was a member of the Massachusetts National Guard. He had worked as a computer technician in the finance industry, and upon his retirement, he spent 19 years driving a school bus for Michael J. Connelly in the town of Hopkinton. He was an active Mason for 40 years in Mount Hollis Lodge of Holliston and a Scottish Rite 32nd Degree Mason in the Valley of Boston. He was a member of the Colonial Craftsman Club, a Masonic group reenacting 1776 On the Square, and National Camping Travelers, a Masonic camping group.  He also enjoyed camping with his family and friends for many years.

Besides his wife, Ted is survived by his children, Cynthia Lynch and her husband James J. of Monson, Sharon Greenwood and her husband, Royce Jr. of Hopkinton, Rebecca Sherman and her husband, Scott of Palmer, and Gretchen DuBois and her husband, Rick of Natick. He also leaves behind a sister, Verna Ross-Hoyt and her husband, Allen of Milford, NH, a sister-in-law, Jackie Hatch of Columbia, SC, his brother-in-law, Donald French, Jr. and his wife, Mary of Berlin, NY as well as 11 grandchildren, James P. Lynch, Dorothy Wegiel, Victoria Lynch, Colin Lynch, Melissa Setterlund, Royce “Chip” Greenwood III, William Greenwood, Simon Sherman, Rachel Meacham, Benjamin Sherman and Kathryn DuBois, and 7 great-grandchildren and many nieces and nephews. He is predeceased by his brother, Alan Hatch.