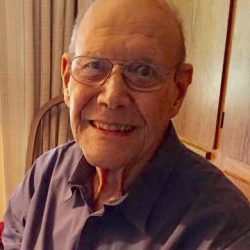 Friedrich (Frits) Geurtsen of Holliston passed away on November 13, 2018 at the age of 86. Born in Jakarta, Indonesia of Dutch parents, he emigrated to the Netherlands after the end of World War II. There he met his future wife, Anna (Anke) van Veen and they married in 1952. They had four children, two born in the Netherlands and two in New York after they moved to the United States.

Mr. Geurtsen was employed first by American Cyanamid as a chemical engineer and then by Dennison Manufacturing (later Avery-Dennison), where he worked for over 35 years in various product development positions. He was a member of St. Michael’s Episcopal Church in Holliston since 1967, where he was active in various church functions.

In addition to his wife, he is survived by his four children: Frits (and Jane) Geurtsen of Boyce, VA, John (and Jennifer) Geurtsen of Harwich, MA, Peter (and Maryellen) Geurtsen of Holliston, MA, and Marina (and Eric) Wijnbeek of Heiloo, The Netherlands, as well as 12 grandchildren and 11 great-grandchildren.